Jeffrey Dean Morgan is building a 20-foot windmill. Not from scratch, mind you, but pretty close. “The company that shipped it to me didn’t send all the parts,” he says. “So, I’ve been fabricating metal and making it up as I go. Parts have been flying around all morning.” It’s actually kind of an apt description of his acting career, too. He keeps making things up as he goes, and the parts keep flying.

It’s emblematic of the kind of guy Morgan is, too — as though the 49-year-old actor missed out on his true calling. Rugged, steely-yet-soulful good looks aside, the man shouldn’t be an actor. He’s a real-life cowboy. The kind of guy much more at home on his 60-acre ranch in upstate New York than the glossy hills of Hollywood. “We knew the second we saw it that this was where we’d spend the rest of our lives,” he says. “I get up every morning and walk a mile around the property. It’s probably my favourite part of the day.” Of course, most mornings he has company, in the form of loyal sidekick Bandit, who became part of the family by happy accident. While filming The Losers in Puerto Rico, Morgan witnessed a puppy get hit by a car and insisted on paying for the dog’s treatment. A week later, the dog was delivered to Morgan’s trailer with a full body cast. “I called [my wife] Hilarie, who was pregnant at the time, and said I was bringing home a dog. And here he is.” 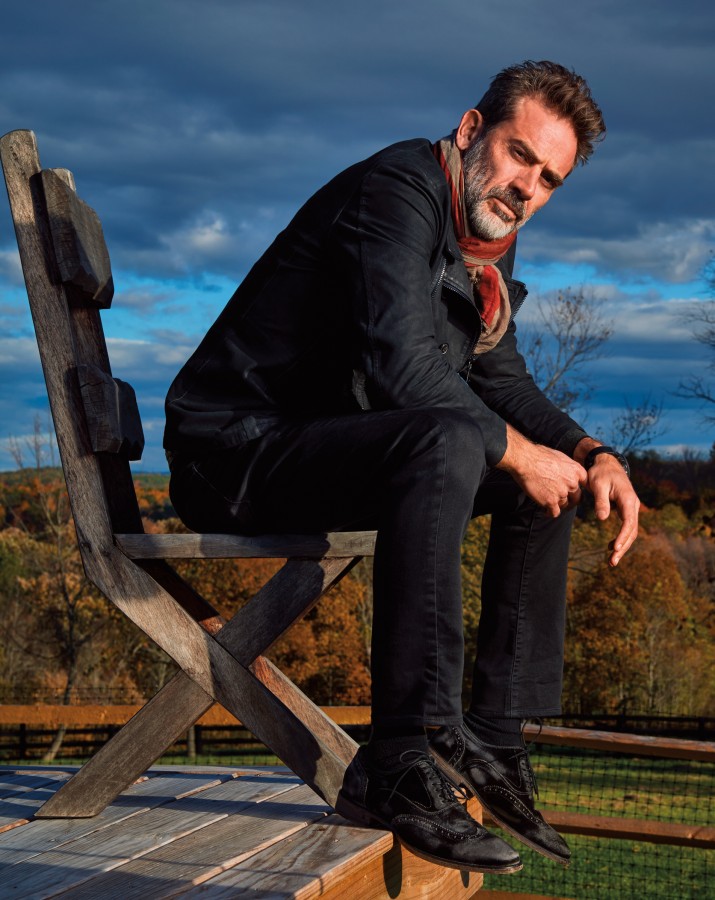 But back to those parts that keep flying; this year, as ever, Morgan is busy appearing in a spate of popular shows, including The Good Wife (which you really should be watching), The Walking Dead, and Texas Rising. But the one that still holds a place in his heart is the same one your wife is probably still talking about: heartbreaker Denny Duquette on Grey’s Anatomy. “It gave me a career,” Morgan says. “It was like a coming out party at 40 years old. Without that I don’t know that I would have what I have now.” Including Bandit, and that half-finished windmill.

Grooming by Kristan Serafino at TraceyMattingly.com