One year is a really long time. Ever say to yourself, “Boy, that year just flew by”? That’s bullshit. Just try spending a year in space. Hell, just one day in space means 16 trips around the Earth, 16 sunrises and sunsets, and 16 chances to watch the orbicular sphere below drag along while you wonder what all your friends and family up to. Now imagine that multiplied by 365.

That’s what Scott Kelly had to live through (well almost — his final tally of days up there was 340). In his new book, Endurance, the veteran astronaut writes about what it was like boarding the International Space Station in March 2015 and spending a record-breaking chunk of his life in weightless orbit. Spoiler: it was tough. He had constant headaches, the drinking water was made of recycled urine and sweat, the toilet broke down often, two ships with critical supplies didn’t even reach him, and he had way too much time to post way too many photos on Instagram (740 in total).

But these annoyances, along with some existential languor, are what humans will need to put up with should we ever hope to ditch this globular junk heap and move to Mars. (The purpose of Kelly’s marathon voyage was to determine if our dream of traveling to the Red Planet could ever be achieved.) We caught up with Kelly, who was in Toronto last week to give an ambassadorial toast at the official opening of Breitling’s first Canadian boutique, to ask him what a year in perpetual free fall does to a body, and what’s really preventing The Martian from happening IRL.

In Endurance, you write about this weird tradition astronauts have before boarding the Soyuz rocket in Kazakhstan: you pee on the right rear tire of the bus taking you to the launch pad. Why is that a thing?

Because the Russians are superstitious and Yuri Gagarin — you know, the first guy in space — did that. So everyone else does it, too.

Right on. I guess for good luck?

Yeah, I guess. I’m not a big superstitious person but we have superstitions in the U.S. space program, too. We have similar things. Not not as extreme, but we do have some.

What’s one of them?

There’s card game we play before the shuttle launches. The commander of the mission has to lose a hand of this lowball poker game before you can head to the launch pad.

I’ve always wanted to know: what does space smell like?

Well, you know, if you do a spacewalk, as an example, and the airlock was previously at vacuum, it has a unique smell. And it’s not the smell of nothing, clearly, because nothing wouldn’t have a smell. It’s a smell of the materials that were exposed to vacuum or the harsh solar rays that create a very distinct smell. To me, it smells like if someone was welding or maybe like sparklers on a holiday that you might light. Like burning metal. 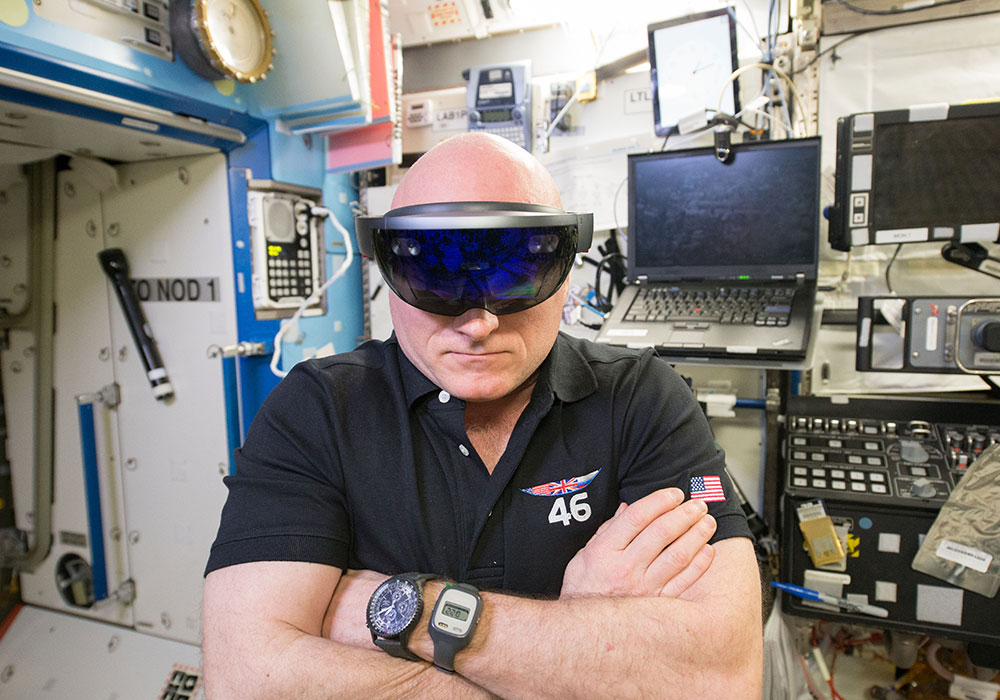 Ha, nice. Did you keep up with the news back here on Earth while you were up there?

More so than when I’m on Earth, actually. You can have live TV up there, so we had a projector screen in the Node 1 module, which is kind of a centrally located connecting module you pass through a lot and that’s where our kitchen and dining room on the U.S. side of the Space Station is. And we would always have the news playing, CNN generally. It was on 24/7, so I was more familiar with what was going on while in space than I am on Earth.

And what were your thoughts on what was happening down here?

Some crazy people down there.

Were you happy to be away from it all?

Not in the way you mean, but you know, you look at the planet and it’s very beautiful and looks like we’re all kind of in this thing called life and humanity together. You get this feeling that people should work better together to solve their problems and to take better care for each other and the planet.

You get the bigger picture, literally.

Yeah, people call it an “orbital perspective” on things.

What watches did you bring with you to space? What features are important on an astronaut’s watch?

Obviously the purpose of this voyage was to see how being in space that long would affect your body, in preparation for eventually sending people to Mars. So what did you learn? How did it affect your body?

Much differently than my previous flight of 159 days. I didn’t feel the same. You know, I think the longer you’re in space, the more of a physical toll it takes on you. So I was kind of surprised in some of the physical effects I had. But there’s a lot of research that was a part of this and that data is still being analyzed and reported about and published, so you know, specific results I’m not too familiar with. Really, it’s more just how I felt.

Part of the research they’re doing is analyzing your DNA and comparing it to your twin’s, to see if it changed while you were up there. When you returned, did you feel at all like your DNA had changed?

I wouldn’t know what that would feel like but I definitely felt not good.

You wrote that your legs felt like alien stumps.

Yeah, they were pretty swollen. My calves and my ankles looked like my thighs. Gross! Why did that happen?

Well, we do a lot of exercise in space. We exercise our large muscles. We have this resistance exercise device, like lifting weights. We do aerobic exercise that kind of maintains some of your cardiovascular health, but apparently there’s muscles in our vascular system that kind of compress to keep the blood in the upper parts of our body that opposes gravity. And after a year not having to oppose gravity, they just got weaker. So when I got back they just couldn’t squeeze hard enough to keep that blood up in the top part of my head. I could just feel it all rushing down to my legs. It is a really strange feeling, when you feel all this blood as you stand up just infusing the flesh in your legs and you can feel it swelling up. It’s not pleasant.

Are you better now?

So, given the weird effect this all had on your body, what’s your verdict on getting people to Mars? Do you think people will last the trip there in space?

Well, a trip there would be shorter than the time I spent in space on the Space Station. People will be spending time on the surface [of Mars] for like a year and it’ll take them 200 days to get back, so the overall time won’t be longer. I think going to Mars, that’s fine. I would imagine, though, if we’re going to go to the moons of Jupiter or something, we’d need artificial gravity. But we have a way to go before we need to worry about that.

What would you say are the biggest challenges in sending people to Mars?

The political science. It’s not the rocket science, it’s the political science. When I was on the Space Station, a guy asked me, “Now that NASA knows for sure that there’s liquid water on Mars, can that help us get there any quicker?”And I said, “I don’t know, maybe.” Now, if we found money on Mars, then we’d get there really fast. So really, the biggest challenge is a refusal to fund the mission.

I don’t know much about Canadian politics, but in the U.S. most members of Congress do not come from a scientific background. And I think we just need more scientists and engineers, you know? I think our representatives should reflect the society, but for some reason most of them are lawyers. (Laughs.)

Right, lawyers with their own interests, which aren’t exactly space exploration. Well, then maybe you can make a case for it now: why is it important to send people to Mars? What does humanity have to gain from it?

I think a lot of things. I’ll cover a few, but one is that eventually, for society and civilization to continue to grow and expand, it’s going to have to do it off of Earth. And I’m not suggesting that everyone’s going to leave the planet, but at some point we’re going to get to the point where if we want to continue to expand our economy and develop, we’re going to have to send people somewhere else or we’re going to just stagnate. I think history has shown us that that’s what happens; you either continue to grow or you die. Same thing in the corporate world right? No one ever has a business plan to keep things where they are right now. It’s always about expansion and growth and development. I think there are things we get on Earth from space travel that are valuable — returns on the improvements in our lives from the technology that’s developed from doing the stuff that’s the hardest thing we can possibly do. If we didn’t have a space program, I don’t think we would have the telecommunications capability and all the stuff that we carry around in our pockets today that uses satellites and GPS and the Internet. You know, all of that stuff, I think it was accelerated and enhanced because of the space program.

There are other things, too, that we get on Earth from the space program, like medical technology, fire-resistant materials, and we also do basic research, biology, chemistry, physics, that we learn more about in microgravity. We learn new things that we couldn’t learn on Earth because we have this variable called gravity that we can change. And then there’s the the idea of, you know, it motivates our kids to study these subjects that are so important to our future. Scientists and engineers are the people who create things and build stuff. Not all things, but a lot of the stuff that’s important to our economy. We need kids involved in those subjects and the space program motivates them to do that because they want to be an astronaut or work in space someday. I think if that’s the only thing we got out of it, which it’s not, but if it was the only thing, I think it’s still worth the cost. And all that money people say we spend in space? I spent over 500 days on that Space Station — there’s no money there. All that money was spent on Earth with high-paying tech jobs.

Elon Musk says he’ll get humans to Mars in seven years via Space X. Do you think that’s achievable?

You know, when he said he was going to land that first stage of a rocket on a barge and then land it on land and re-fly it? I thought he was crazy. And then he did it. So I would never doubt him again.