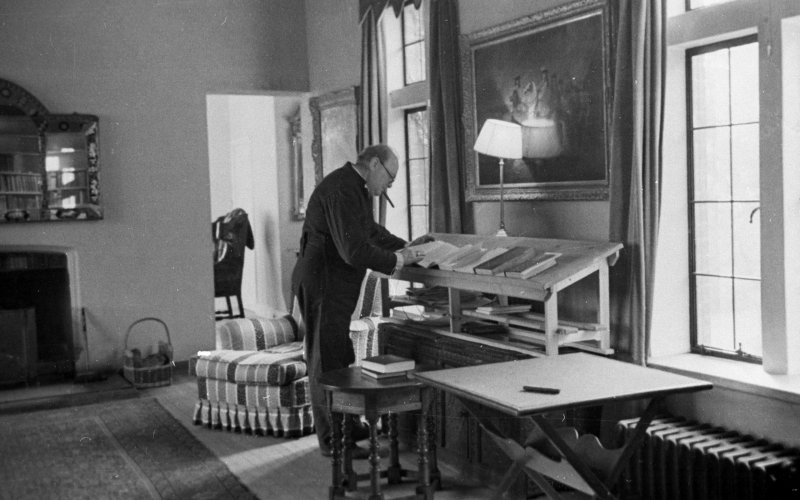 Part of sustaining a healthy lifestyle is constantly learning and reassessing what you eat and how you exercise. As insufferable as CrossFit zealots and Clean Eaters can be, I understand where they’re coming from. In order to lose 140 pounds, I needed to make health and fitness one of my hobbies. And people tend to talk about their hobbies.

To that end, after our office was destroyed by a flood this summer (weak pipes are a risk when you choose to work in a shabby-chic Manhattan-style warehouse building) I traded in my executive desk for a sit-stand desk. Turns out Ikea has a number of great sit-stand desk options, and I went for the electric version that powers up or down with the touch of a button. One convenient little button. A button I hardly ever touch. A button that’s ruining my life.

The problem is manifold:

1. There’s nothing wrong with the desk. It’s my psyche that’s causing the issue. At first it seemed convenient to have the option to sit or stand whenever I wanted. But then, it turns out I can turn pretty much anything into a challenge of some kind. It’s why FItBits are so dangerous. 10,000 steps? How about 12,000 today! Stand for two hours? Eight hours! Suck it! Sitting is quitting.

2. Standing is great for your core, some sources even claim that you burn an extra 400 calories a day standing vs sitting. But, if you’re burning calories you’re burning energy. After 6-8 hours of standing in front of my computer, I’m bagged. And when you have a 5-year-old, not to mention a wife, coming home and taking a nap is (unfortunately) not an option. Not only because I’d like to see them, but also because I’d like to stay married.

3a. It’s work standing all day at work. As a result, I sweat. I’ll say it. It’s occurred to me that people are often too cold in offices because they aren’t moving. Try standing all day and I think you’ll find it easier to stay warm.  Dry-cleaning bills are on the rise…

3b. Though it might not seem like much mental exercise to stand — in fact, the vaunted opportunity of thinking on one’s feet is one of the reasons people seem keen to try standing desks — I was surprised by how much harder it is to concentrate on some tasks. It gave me new respect for the folks that ring through your groceries. Well, almost. Still, I find I need to sit down for detail-oriented work on spreadsheets or reviewing contracts. I also need to sit to eat soup. Tried it standing. Total mess.

4. It changes the flow and feel of meetings. Now, it’s a bit off-putting for the people at work to see me sitting. And for my part, I’m oddly conscious of the weird dynamic that arises when people are standing in front of me while I’m sitting. I don’t like. But, the inverse is uncomfortable for them: it doesn’t help that I’m 6’5” so if they choose to sit while I’m in Standing Mode, I’m literally towering over them. Most have taken to standing for desk-sides now; like my desk is a high top table at a pub. It’s not an unpleasant, exactly.

5. My awesome Herman Miller Aeron chair—a chair I had coveted for a long time— is cast off into the corner. This is like buying a sports car, and never driving it.

6. Injury. Seriously. I think I’ve developed a corn from the pressure of favouring leaning on my left foot more than my right.

But, corns and sweat and awkward employee interactions be damned. Sitting is quitting. I’ll stand and suffer 90% of the time. Plus, like anyone who gets up early to jog in the wintertime, or bleeding heart health nuts who give up refined sugar, red meat and carbs, the upside to any gain, despite the pain (you know, aside from the inherent increase in quality of one’s life) is the sense of superiority I feel when telling people I stand all day. They groan, and with good reason, but you know it’s a groan that comes from respect. I know because now everyone else in the office wants one. Let them: misery does love company.