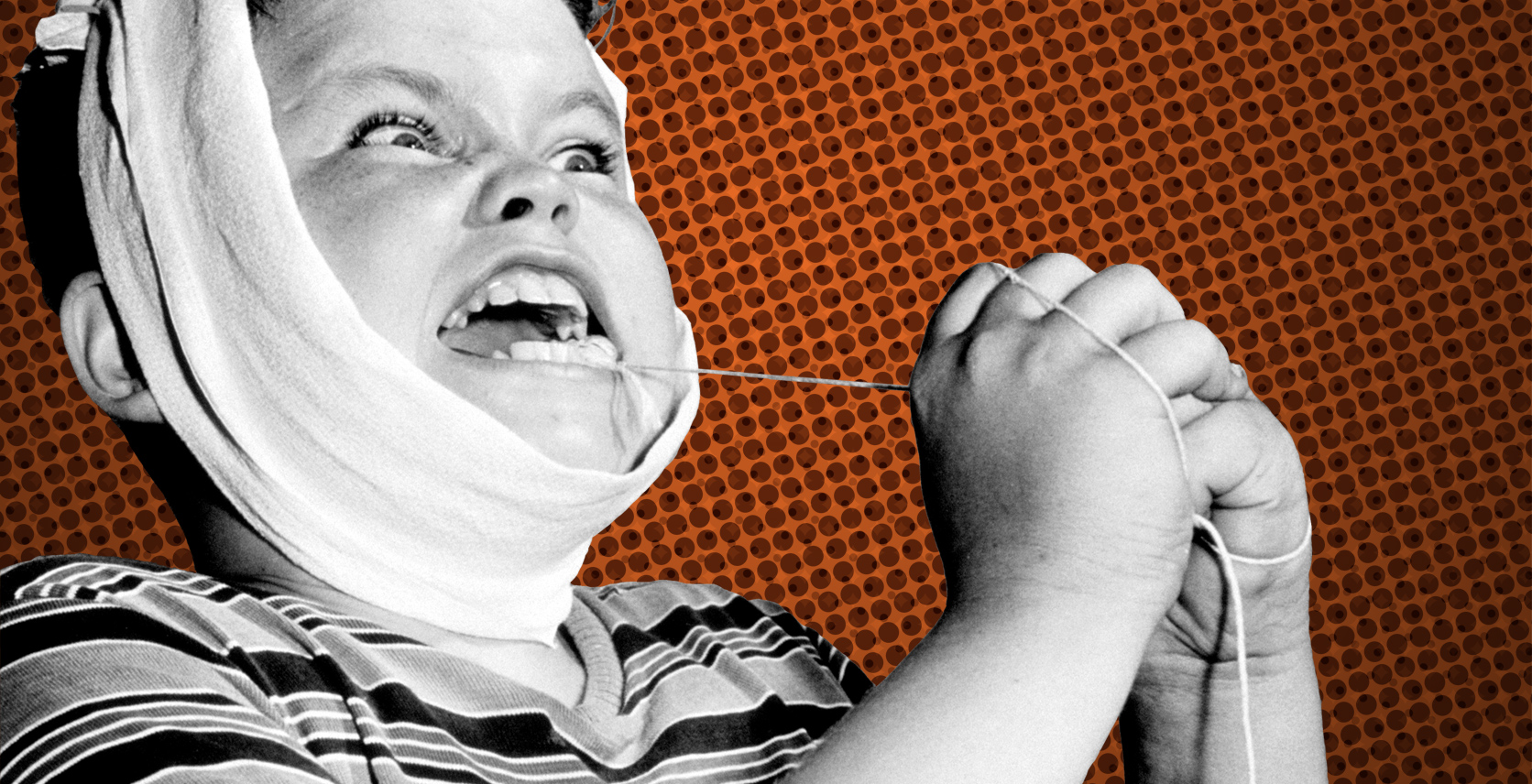 My girlfriend, Angela, has both her hands in my son’s mouth, trying one more time to loop the floss around his front tooth.

The floss is tied to a length of twine, which, in turn, is tied to the front door of our apartment. It will be my job to slam it while Brendon, our good friend from across the hall, records it on his phone. But first Angela has to get that tooth secured.

“Agha!” says Zev, more insistently, and the floss slips off his tooth.

“What?” says Ange, pulling her fingers out of his slobbering mouth.

“Tighter…” says Zev, a little too late. This classic loose-tooth-tied-to-a-doorknob gag is all his idea, and he’s determined to get it done. It’s precisely the kind of thing he gets passionate about: a little mission that requires a bit of bravery, blood, and physics. For me, it’s been a remarkably crappy day — a hundred little things that didn’t go the way I’d hoped — and I’m happy we can put an end to it by helping my boy rip out his tooth. It’s a rare thing when catharsis and fatherhood are so eagerly entwined.

As the saying suggests, however, pulling teeth isn’t easy. In fact, we’ve already slammed the door once, yanking the twine out but leaving the tooth behind. And even trickier than pulling teeth is the business of losing them. It may, in fact, be one of the most dichotomous aspects of the human condition: a natural part of being very young and of growing very old, and yet so deeply unnatural in the rest of life that it’s banished to the realm of drug addicts, hockey goons, and our most anxiety-ridden nightmares.

Dreams in which your teeth fall out are, in fact, among our most common nightmares. If you type the words “dreams where” into Google, chances are the phrase will be completed not by “you fly” or even “you die’” but “your teeth fall out.” If you’ve never had this dream, you’re a lucky soul. It is truly terrifying. And, of course, the possible meanings, as suggested by all sorts of psychologists, analysts, and holistic dentists, are strange, varied and offer very little comfort. Traditionally, to lose a tooth in a dream represents a deep-seated fear that you’re losing control of your life.

When I sleep, my teeth become unhinged, tear, and crumble in my mouth — sometimes one or two, sometimes all of them, and I end up chewing on the bloody, stubby mess until I scream myself awake. That’s happened about once a week for over a decade now.

Ironically, however, it is having not lost my teeth that’s most often endangered me in real life; more than once, while doing stories undercover, I’ve been pegged as a narc for that very reason. When I first showed up in the shanty town where I then lived for a year, I weathered the kind of beating that should have taken the teeth right out of my head. But still, that particular loss only happens for me in dreams — other interpretations of which are that one is mourning the death of childhood and any sense of safety — or is scared to lose something else, something very important…

“If you type the words “dreams where” into Google, chances are the phrase will be completed not by “you fly” or even “you die’” but “your teeth fall out.” If you’ve never had this dream, you’re a lucky soul.”

“Come here,” I say to Zev as Ange fashions a little lasso with the dental floss. I put my finger to his tooth and wiggle it gently. It is so small, and the movement — that grinding stiffness inside the softness of his gums — pulls at my chest. But he is smiling. It occurs to me that after two teeth lost in passive, pedestrian ways (one while eating and the other while sleeping, both at his mum’s) — this could be his method of taking control: designing and directing the grisly sacrifice so it’s done on his own terms. It’s a giving away rather than a loss. I want him to have all that, but also any help he needs.

“Put your head back,” I say. “And don’t just smile. Grin like a wolf.” That’s what Zev’s name means: wolf — which he loves. I hold his soft, warm face in my hands as he bares his teeth to the skylight of our apartment and Angela gets that little lasso all the way up to his gums, and over the top of his tooth…

Maybe this is also a sort of gift he’s giving me. I’m leaving this place in a few days and spending the next three months a long way away. As I put it to Zev, I need to go away for work and spend some time with my own dad, who’s not been well. Zev is intuitive when it comes to this kind of thing — and who knows how many teeth he’ll have lost by the time I see him again? Plus, he may also figure there’s a good chance the tooth fairy will be even more generous at Dad’s place these days — which he’s probably right about.

“You ready?” I ask him. He nods almost imperceptibly. Ange releases the string, I step to the door, which Brendon has been propping open, and now we’re all in position — twine and floss pulled taught from tooth to doorknob. “1, 2…” I say. Then SLAM!

The twine gives a jump, Zev gives a yelp, while his tooth — like a surreal mix of dreams — soars through the air. We let out a cheer, and the boy is just standing there, in shock and happiness – his mouth still open, a bloody space in his smile. But then he cocks his head. “Where is it?” he asks. We turn back to the string, but the tooth isn’t there. We can’t find it anywhere.

The area by the door is more chaotic than usual, with half-full crates, half-packed luggage, and boxes of recycling. And that tooth is so tiny it might even fit between these ancient floorboards. As with so many things these days, I didn’t think ahead — or was worrying about the wrong stuff. We start emptying boxes and suitcases, then Zev and I get down on our knees, peering at every little speck on the floor.

“I’m pretty sure he could just write a note to the tooth fairy,” says Brendon after a while. “As long as we all sign it as witnesses. I’ve heard of people doing that.”

“No,” I say, a little more adamantly than is warranted, and start pulling things away from the walls. And then there, stuck in a corner behind the radiator, among the detritus of paint chips, dust balls, and dirt, is a small white tooth. I wipe it off and hand it to Zevvy. There’s blood on his gums as he grins, showing us all his remaining teeth — like a wolf who let something go, then caught something even better.

He puts it in a small red pouch and tucks it under his pillow. When it’s time for bed, I read him a story, turn off the lights, and Zev asks me to hold him as he falls asleep. “Have good dreams,” I say, my mouth against his ear. Then I run my tongue across my teeth, take a breath, and close my eyes.