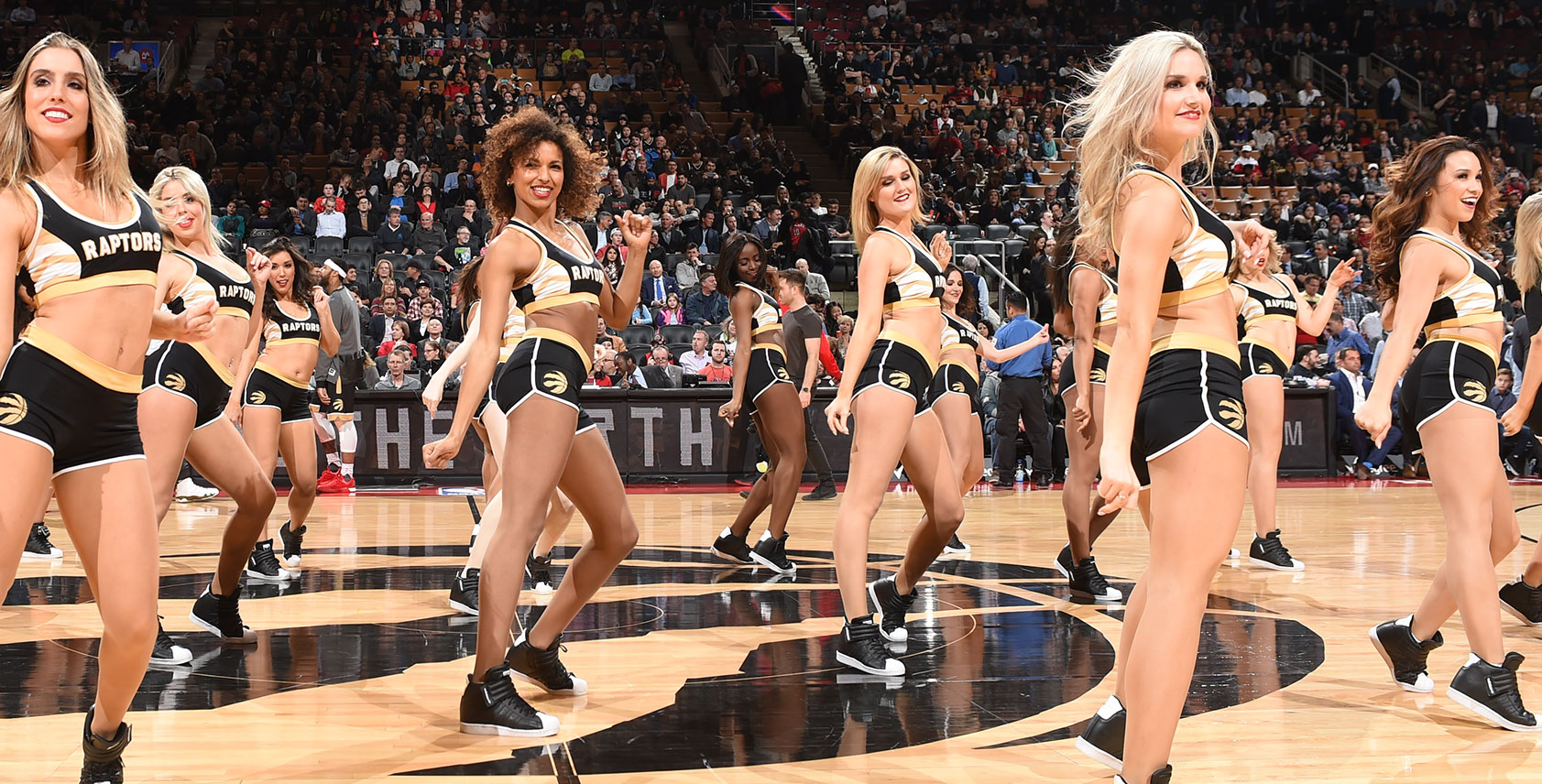 Admit it: watching the Raptors Dance Pak do their thing between quarters is maybe the best part about catching a game live. We can’t judge you. For 41 games a year, those ladies get out on that court, dance their hearts out and look damn good doing it. It’s impressive.

This season, two of Toronto’s longest-serving dancers, Mariah and Lindsay, are moving to the front of the pack as co-captains. Their ascension in the ranks isn’t that big of a surprise; when we meet at the Air Canada Centre to chat, it’s clear they both inhabit everything a Dance Pak leader should be.

“You have to be skilled in a lot of areas,” says Mariah. “You need a strong dance background, you need to be a people person and you have to have a lot of confidence. It’s immediately noticeable.”

Both women joined the team at the age of 18 and effectively grew up in the Pak. Despite going from the “toddlers” of the group to its experienced leaders, Mariah and Lindsay aren’t jaded in the least. They approach every season with the same excitement as they did their first. Especially when the Raptors make the playoffs.

“The fans pump us up as much as we do them,” says Lindsay. “During last year’s playoffs, they’d be outside in the rain cheering as loud as possible. Cheering in the rain shouldn’t be so fun, but with hundreds of fans, it was such a blast.” Mariah: Picking the mascara off my eyelashes! I know it’s so horrible.

Lindsay: I think just touching my hair. I do it all day.

What is your favourite song to dance to in private?

Mariah: “Crazy in Love” by Beyonce. But I’ll gladly do that in public!

Lindsay: She’ll get up on furniture to do it! I like anything country. What’s your favourite movie to watch again and again?

Mariah: Bring It On. I probably shouldn’t say that because it’s so stereotypical. [Laughs.] But it’s so amazing. Or Straight Outta Compton, too.

Lindsay: We Bought A Zoo. It’s one of my all-time favourite movies. Actually! It’s so good. You all need to watch it.

Who is your favourite athlete at the moment? What is the worst thing that ever happened to you on a date?

Mariah: Oh god. A guy told me that we would just go grab food after a dance class so I didn’t think anything of being in my sweats, but he ended up taking me to a really fancy restaurant. The worst part is that he wore sweats too, but on purpose! He didn’t think it was a big deal at all. He actually looked at me and said “Don’t you love defying society’s norms?” I left almost immediately.

Lindsay: A guy thought it would be fun to go to a driving range, but never in my life had I ever golfed before. I don’t think I actually hit one ball, I missed every single time. It was so embarrassing.

What reality show would you want to be on?

Mariah: I think Big Brother. I’d have this strategy of being this nice hippie that no one would be suspicious of until I kicked ass in all of the challenges and won the whole thing.

Lindsay: To be honest, I think we should have our own reality show. What is your most prized possession?

Mariah: My black belt. I did tae kwon do for 9 nine and got my black belt. It was my proudest moment. It taught me about discipline and I think without that training, I wouldn’t be as good a dancer as I am.

Lindsay: I don’t know that I have anything like that. I can’t think of anything.

Which sport (besides anything dancing/gymnastic-related) would you want to compete in at the Olympics?

Mariah: I think diving. I love watching it. Or pole vaulting. I just want to fly through the air, basically. [Laughs.]

Lindsay: Fast walking! That seems so interesting. I do a lot of walking and I’ve been told I’m pretty fast!