Whether dressed in a crisp suit in the Ocean’s movies or weaponized armour in an Iron Man adventure, Don Cheadle somehow always manages to come across as the coolest guy in the room — even when that room features an ensemble that includes George Clooney or Robert Downey Jr.

This summer, hundreds of millions of people will watch as Cheadle saves the world in Avengers: Infinity War. Offscreen, the actor has taken his role as a superhero to heart, maintaining both a very real awareness of our greatest threats and a serious commitment to keeping them at bay. When Lindsey Graham made the recent claim that war with North Korea would be “worth it” on Twitter, Cheadle fired back: “Define ‘it,’ please.”

We sat down with the star of Crash and Hotel Rwanda to hear how he picks his battles — and how he found his place in the crowd. 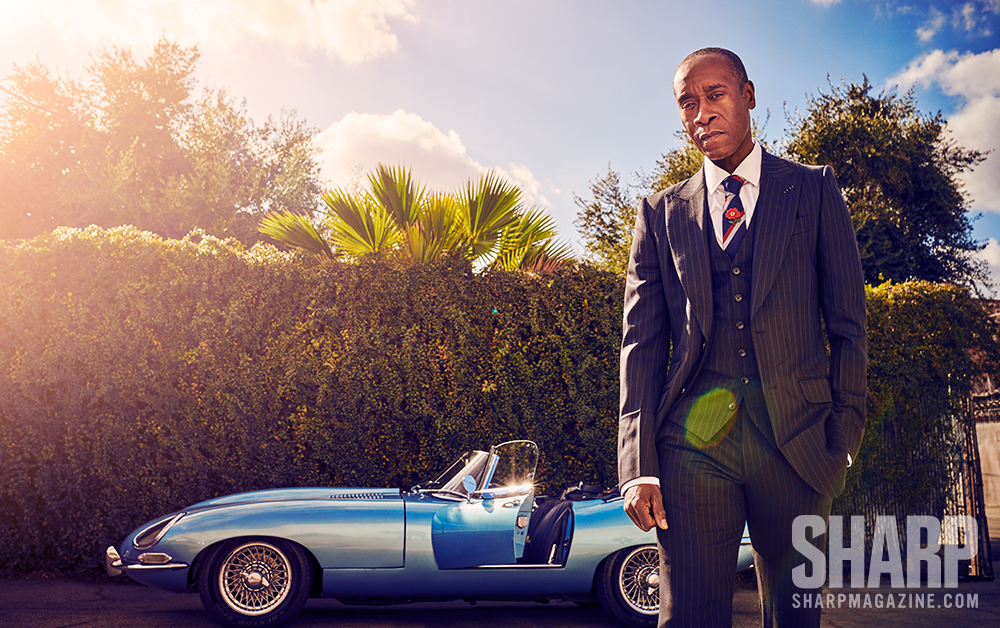 This is your fourth Marvel film. I’m guessing you walk onto the sets feeling pretty comfortable by this point?

Yeah, until you put on the armour pyjamas, and then you feel uncomfortable again. [Laughs.] There’s always a bit of a learning curve at the beginning, because you’re trying to create real relationships with new cast members — even though they’re painted purple.

Marvel movies have this magic balance of comedy, drama, and action. What’s it like to cover so much range in a metal suit?

Daunting. Robert and I will always laugh when we have to emote in a battle scene close-up, because in the moment, it can feel like the worst acting you’ve ever done. You get very neurotic if you worry about the outcome of a scene with 360 degrees of green screen. But you develop a lot of trust because of that.

Your character has also been involved in some pretty deep debates about government regulation. Have these movies gotten heavier than you expected?

Yeah. I am always surprised. Of course, the comic books are heavy, and it is interesting — in a good way — that Marvel is taking that on more and more. I like that. When you have so many other fantastical things happening, it grounds it in reality. What have you learned about being a good team player in movies with half of Hollywood in them? Or are you the diva?

[Laughs.] No, I’m not the diva. I’m the one that’s making sure that everybody gets the ball — which isn’t always the best thing for self-preservation. You have to take care of yourself too, and take responsibility for your own work, because there are so many moving parts to keep an eye on. The scope of these movies is such that you walk onto a set and the entire sound stage is tricked out with, like, 20 Oscar nominees next to you.

Does starring alongside so many other A-listers build up your ego, or keep it in check?

It depends on my cheque. [Laughs.] No, I think of everybody as people that I’ve worked with for a long time. We’re in this business that makes acting seem like some rarefied thing — and in some ways it is, for sure — but everybody has husbands and wives, and they have responsibilities at home. They’re all just trying to figure out what the best way to drive the kids to school is. So I know them more on that level.

It’s just how I grew up, and what I come from. It’s my parents — they made that a part of who I was. George Clooney said, in his experience, the thing doesn’t change you — it just makes you more of who you are. Because of the way I was raised, I’ve always been political, and I’ve always spoken out about things that I didn’t think were right. I’ve always felt worse if I didn’t say something about the way I thought something should be than if I did. We’re talking a few days before the Oscars. In 2016, during the #OscarsSoWhite backlash, you joked on Twitter that the Academy had you parking cars. How do you feel about this year’s nominees?

It’s very interesting what the turnaround has been. But it’s not just as a result of those 2016 Oscars. As we’re talking, there are all kinds of social changes happening around the country in reaction to a polarized viewpoint. So, the marketplace has responded to that. But even still, the whole process of pitting actors and directors against each other — you can talk about excellence, for sure, but someone getting it over someone else?

You earned an Oscar nomination for Hotel Rwanda back in 2005 —

Okay, that’s when it mattered! Now it’s a circus. [Laughs.] No, the Oscars has always been very interesting. I felt glad about that nomination, because of the attention it brought to the subject matter of that movie. But it also really taught me a lot about the business. It was the first time I heard an executive say, “If we don’t get any Oscar nominations, we’re not going to do any more press.” I really started to understand what matters in the process — how you’re able to shift more units if you have an award on the cover. It changed my focus, in terms of what the real mechanism is, but it took the shine off, too.

Avengers: Infinity War is the first Marvel film coming out since Black Panther. How have you felt its impact?

You’d have to be asleep not to feel the impact of that movie, right? That movie was a thunderclap. Every aspect of the film was amazing. We’ll see going forward. It feels like it’s sort of lit a match in a way, and opened up a lot of doors — now you can say a lot more, so we’ll see how that tracks. I mean, they’re going to do another one, and I’ll just say, if I’m not in it, I’m going to boycott. [Laughs.] That’s one of my key points on that subject. What’s changed since your early days of acting?

Back when I went in to audition — when you’d still talk to actual people, not just tape for a camera — you knew that if you could win the room, you’d probably get the job. It came down to who did those people want to go to work with every day, and trust this art to. Me, Michael Boatman, Dylan McDermott, and Courtney Vance — none of us had real fame, and yet we could all get a job in Hamburger Hill. Now it’s, What was that person on? How big is their Instagram following? That’s real shit! People are really getting a job off of that.

In between your last two Marvel projects, you wrote, directed, and starred in a Miles Davis biopic. What did you take from that behind-the-camera experience?

It took me a long time to have any kind of perspective on that experience that was substantive. So much of it was just sweaty, behind-the-eight-ball, day-to-day terror, and knowing that I had taken a huge bite of something — I was chewing all the time. Even a year later, I haven’t watched the movie. I still feel too close for that, which is weird. But it taught a lot of lessons in terms of understanding what a movie means from all sides of production. I’d directed plays before, but a movie is a different animal — it’s a big, big deal.

What convinced you to take the War Machine role in Iron Man 2, back when superhero movies were less of a proven thing?

It was definitely a gamble. I came in after Terrence [Howard] was in the role for Iron Man, and there was stuff around that I wasn’t sure about. Ultimately, I popped in, and we talked, and there was nothing to squash. We had just put Terrence in Crash, he was a good friend of mine, and I knew his relationship with Marvel wasn’t going forward. I got the call and they said, “We need a decision in an hour.” I was at my daughter’s birthday party. It was a big roll of the dice — for six movies! — but between laser tag and pizza and ice cream, I talked with my wife about it, and we said, “Ok, let’s go. Let’s do it.” And Marvel’s really been in my corner ever since. You’re working on a script about Wall Street’s first black billionaire. How strategic are you about lining up your roles?

There is a mix when it comes to taking care of your career — especially in this phase of it. But mostly, I’ve made decisions around family — are the kids in school at the moment? — and less thinking, This thing’s going to flop, and this thing’s going to be huge. If you’re waiting for that certainty, you’d never work. But it feels like, at this point, it’s time for me to develop and create stuff. That’s why I started my production company. I’ve been mostly smart about my finances, but if I have to have a fire sale and sell everything off, I can take it.

You’re battling a big purple guy in Infinity War. How do you unwind after that? I saw on Instagram you went whale watching.

Yeah, that was in Hawaii! We have a place there that is really special. That and music are my escapes. Music is what I was originally tracking to do all throughout high school. I still play the trumpet, and now bass, and it’s always going to be something close to my heart. But whale watching is a cool way to do it too.