“Rock ‘n’ roll is definitely in the hands of 19-year-old girls,” Emily Haines of Metric told The Globe and Mail last summer. She was referring to The Beaches, an ass-kicking all-girl rock band from Toronto.

The quartet — comprised of sisters Kylie Miller on lead guitar and Jordan Miller on lead vocals, with Leandra Earl on guitar and keys and Eliza Enman McDaniel on drums — may not be 19 anymore, but after years of developing their craft, their first full-length record, appropriately called Late Show, is finally out. Haines and Metric’s Jimmy Shaw produced it.

Just before embarking on their North American tour with Death From Above (you should follow them on Instagram if you want to see all their behind-the-scenes stories), Leandra and Kylie dropped by Sharp HQ to chat with us about the much-anticipated album, working with Emily and Jimmy, and the cringiest parts of Toronto.

So where did the title Late Show come from?

Kylie: It’s actually a song off the record. It’s the oldest song we have as a band. We had the song before Leandra even joined. When we transitioned from our old band to our new band, we wrote “Late Show” and it really was kind of a mission statement for the music that we wanted to make. It’s a super simple, just straight-up rock song — that’s kind of the record we wanted to make. It’s taken us a long time to release the record so we thought it would be fitting calling it Late Show.

Leandra:  We’re late to the show… but we’re here. (Laughs.) We’ve been playing it live and it’s one of our strongest songs. [It gets] everyone moshing and going crazy. We end our set with it and it’s just fitting.

How was it working with Emily Haines and Jimmy Shaw?

Leandra:  We had a trial session with them where we did a demo of one of our songs, “Sweet Life.” We kind of knew from the very second we got there that they were on the same page as us. We just vibed.

Kylie: They understood what we wanted to do and they didn’t really want to change us or change our sound too much. Even their approach to songwriting and producing was completely different than anybody else we’ve worked with. They didn’t really want to change our songs; they just wanted to make them all kind of fit together and be a cohesive unit. Having someone believe in your songwriting qualities and not put their name on it or change anything was awesome.

The album is a collection of your experiences growing up in Toronto. What’s a really great memory of growing up here and what’s your cringiest?

Kylie: We’ve become best friends in this city. We all got to know each other because we all grew up here. We also always go out together and we have some fun times and sometimes some really not so fun times. (Laughs.)

Leandra:  I mean, the great memories are from when we first became friends and I joined the band. We would go drinking at Jack Astor’s all the time underage. We would get wasted from the grossest drinks, like those blue big bowls or whatever, and we’d go out on the streets and, like, pee on the sidewalk. (Laughs.)

Kylie:  We were just, like, really crazy. That was super fun but also kind of cringey when I think about it now. (Laughs.)

Leandra: A lot of the cringe happens on the TTC. There’s a lot of cringe on the subway.

Where does the name “The Beaches” come from? Are you guys from the Beaches?

Leandra:  I’m not. But it was named before I joined.

Leandra: (Laughs.) We’re not a bunch of suburban moms walking our dogs.

You guys are going to start touring with Death From Above. How stoked are you and how did that relationship happen?

Kylie: We actually met DFA backstage at the show we played with Eagles of Death Metal at Canadian Music Week last year. I guess that’s sort of when they first heard of us. Recently, they followed us on Twitter and we became kind of like social media friends. Then we got a call from our manager saying they were really big fans and they were really excited about the record and they wanted to take us on tour. We were blown away. They ended up coming to our show in Quebec City and we hung out with them until four in the morning. That’s kind of when the deal was sealed. (Laughs.)

Some of your influences are David Bowie and St. Vincent. Are there any other influences?

Kylie: Leandra and I specifically are massive Pretenders fans. We love Chrissie Hynde so much. We also love Stevie Nicks and The Breeders. They were a big inspiration for a lot of the songs on the record.

Leandra: Nico from The Velvet Underground with those oversized suits. How about Karen O and Shirley Manson?

Kylie: Oh, massive fans! I love Shirley Manson. I actually wanted her to produce our record like a long time ago when we first started. We got signed to a record label and 16-year-old me went into a meeting and was like, “Shirley Manson would be a good producer.” (Laughs.)

I feel like the rock scene has gone away a bit. Do you think it’s going to make a comeback?

Kylie:  I hope so! It was super important to us to release a rock record. Our last EP was kind of more synth-driven, which was really cool, but we wanted to really release a guitar rock record because we feel like there’s an absence of it right now. There should be a resurgence of that.  It’s so powerful! Rock music is such a powerful thing and it really affected all of us when we were really young and it was something that was really important to us. We want to be that band for other people.

Leandra: We’re going to these shows now, like our friends Goodbye Honolulu. They put these shows on and it’s packed and these kids are all moshing and they’re really into this whole rock resurgence. It looks like it can make a comeback cause there are so many kinds into it.

Kylie:  There’s a community that’s being created and it’s really cool to be a part of that.

What’s the lamest attempt a guy has made to pick any of you up?

Kylie: (Laughs.) There’s been a couple of really weird ones. This guy at a show in Windsor, Ontario — he was wearing this really weird Speedo thing and he came up to me and I was super confused. He was like, “Yeah, I got a boner watching you play.” I was just like, this is the weirdest thing.

Leandra: They slide in the DMs a lot. You’ve got a lot of annoying dudes who won’t stop messaging you. 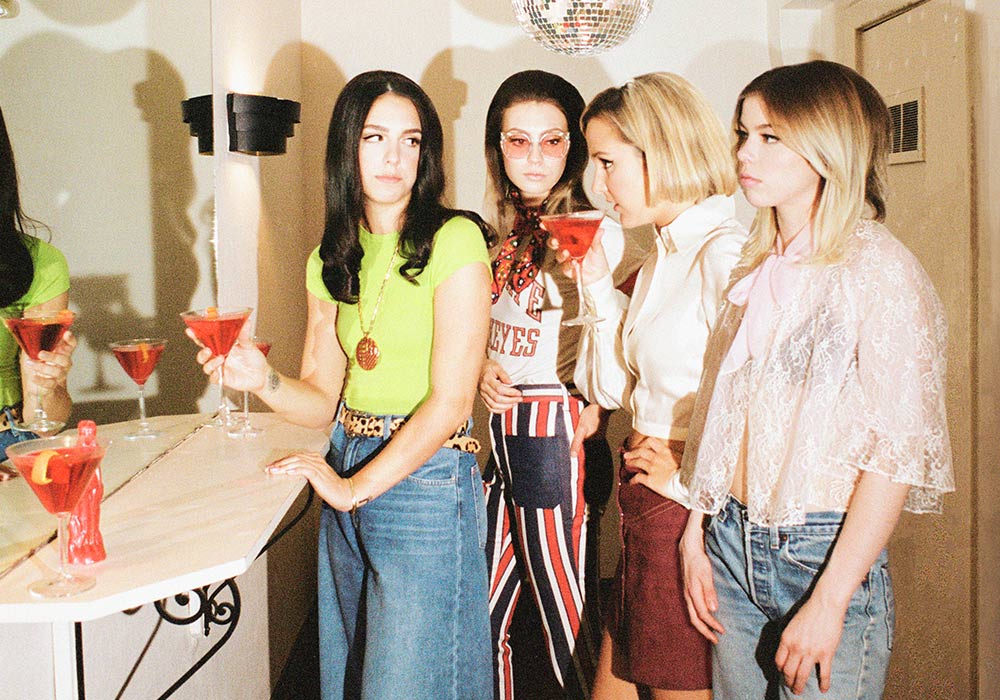 Leandra: (Laughs.) Alright. I’ll go kill Chad. Marry Adam, because you’d have, like, a good time for your whole life, and then fuck Jared Leto. But he disturbs me (laughs), so I’d be like, hmm… I don’t know.

Kylie:  Oh man. Okay, I think I’d have to go with the same order as you. Kill Chad, marry Adam, and fuck Jared.

Leandra: Cause I couldn’t live with Jared Leto for a long time. He’s a weirdo. (Laughs.) I saw him in Blade Runner and was like… what the fuck?

Music is a notoriously difficult industry to succeed in. I was wondering how you guys block out the noise of people asking, “Should you be doing this?”

Leandra: There’s actually a lot of support from our friends and family. There are a couple of friends who were like, “What’re you doing? Why aren’t you in school? You’re not going to make money from this.” But we just practice everyday. There isn’t anytime to hear the haters. (Laughs.)

Kylie: It’s true, though, and I think that the fact that the four of us are all such good friends, we are each other’s support system. Even when we had people question us, we’re so sure of ourselves and one another that we’ve really been there for each other throughout the whole process. Being able to have one another, it kind of strengthens us and makes us tougher because we’re a unit. I have three of my best friends constantly supporting me and doing the same thing I’m doing.