A version of this story appears in Sharp: The Book For Men Spring/Summer 2019, on newsstands now.

Sam Rockwell’s feet hurt. The actor just wrapped a dance rehearsal in Midtown Manhattan that ran way past schedule. He’s playing Bob Fosse — the legendary dancer-turned-choreographer-turned-speed freak — in FX’s limited series Fosse/Verdon. Learning to get down like Bob Fosse, it turns out, is very hard. It’s endless sweat and grind and jazz hands and bunions, for hours upon hours, on alternating feet. Surely, there’s a reason he wanted this role — he just can’t remember it.

“God only knows,” he grumbles, in a car on his way home. “I don’t know. What the fuck was I thinking? Yeah, it’s a beast; playing Bob Fosse is no joke. This is one of the most challenging things I’ve ever done.”

Which says a lot, as Sam Rockwell only does challenging things. He’s played a sex-addicted con man (Choke), a doppelgänger-having astronaut (Moon), and a whole swath of Very Complicated Men, one of which (Three Billboards Outside Ebbing, Missouri) won him the Academy Award for Best Supporting Actor in 2018. This year, he got another Oscar nomination for portraying George W. Bush in Vice, wherein he uncannily captured Dubya’s every nuance, down to the lip-forward speaking style. “Oh my God, that almost killed me,” he says. “Just months and months of tweaking your chin muscles like that. It can’t be good for you.”

And yet it’s this role, as a Dexedrine-popping, Broadway big-timer, that he finds especially back-breaking. Which seems curious. After all, Rockwell has been known to deftly cut a rug onscreen. (Remember his footwork-heavy heel turn in Charlie’s Angels?) He tells me playing Fosse is taxing not only physically, but also mentally. The theatre icon was an obsessive, lecherous, tormented man who essentially danced himself to death, suffering a heart attack minutes before one of his shows. “He had a lot going on,” Rockwell says. A theory: Rockwell sees himself in Fosse, more than he’d like to. Okay, maybe not the skeezy part, but definitely the compulsive overachiever part. The 50-year-old, to be clear, is hustle incarnate. The past few years, he’s had a long run of crushing, morally exhausting parts. This spring, besides Fosse, you’ll catch him as a conflicted Klu Klux Klan chief in the historical drama Best of Enemies, and then a disillusioned Nazi captain in the dark comedy Jojo Rabbit.

Rockwell, too, has had a lot going on.

“I worry about burning out,” he confesses. “I think I’m about to burn out right now. I’ve been doing Fosse for, like, months. I’m probably going to take a break.” He stops a beat. “No, I need a break for sure. I definitely need a break.

Dancing — or “hoofing,” as Rockwell calls it — is a skill the actor developed early in life, by necessity. He grew up in San Francisco, raised by his dad (an actor himself), and shuffled frequently between inner-city schools, where he often “got beat up and stuff like that.” Eventually, at a performing arts high school, he’d meet his BFF Leroy, an African–American kid who’d take him to parties where busting a move was de rigueur. “It was just the way to meet girls,” he says. “I was in a certain crowd at that time and breakdancing was in. I was pretty bad at it, but I did the best I could. Michael Jackson, zippered leather jackets, Footloose, Grandmaster Flash — that’s what was big back then.”

“I’m just there to play the part and try to find some humanity in the character.”

He much preferred this scene to the other popular one at school, where white supremacy, apparently, was trending. “There was a group of these bullies called WPODs: White Punks on Dope,” he says. “They were basically San Francisco’s skinheads. So, I guess I got a little taste of that when I was a kid.”

It’s certainly a sour taste, but one Rockwell has oddly become known for engaging with. He’s played his fair share of bigots, from prejudiced cops (Three Billboards) to racist convicts (The Green Mile) to the Klansman and Hitler Youth leader he’ll appear as this year. It’s all coincidental, he insists. (As is the shaved head, required to play the follicularly challenged Fosse.)

“Complicated characters” just happen to be in his wheelhouse. He grew up on anti-heroes: De Niro in Raging Bull, Nicholson in Five Easy Pieces, Sheen in Badlands. “You know, people who are incredibly flawed,” he says. “And somehow, they find catharsis or there’s some heroic aspect to them. That seemed more popular in American cinema in the ’70s. We don’t have much of it anymore. Now we’re more into black hat versus white hat archetypes, with all the superhero movies.” It’s the Rockwell special: an ethically dubious man you wind up rooting for anyway. He first served it up in his 2002 breakthrough, Confessions of a Dangerous Mind, injecting touching vulnerability and effortless charm into the film’s unhinged protagonist. Since then, he’s become Hollywood’s go-to guy for bringing a heartbeat to the offbeat. You see it in Three Billboards: a detestable pig who, by the end of the movie, becomes somewhat lovable.

You might expect a guy like Rockwell to have opinions on current events, what with all the racially charged characters he’s been playing in one of the most divisive political and social moments in modern history. But don’t get it twisted: he is by no means “woke.” Dude doesn’t even have Twitter. “You know, I’m not really a political guy,” he says. “I’m just there to play the part and try to find some humanity in the character. I’ll leave that to Bill Maher and all the experts. I’m just a dumb actor.”

Not that he’s saying all actors are dumb. “Ben Affleck’s really smart about that stuff. There are some actors who are really smart at it. George Clooney. I’m not that guy.”

For much of his career, Rockwell has, in fact, been That Guy. A face you’ve seen in just about everything but can’t quite put a name to. Otherwise known as a character actor. Hell, his opening monologue on Saturday Night Live last year literally began, “You probably know me as ‘that guy from that movie.’”

Of course, that’s far from the case nowadays. With Oscar cred and a slew of other statues on his shelf, it’s safe to say Rockwell’s ascended to veritable Hollywood leading-man status. “Things are changing, but it’s ever-changing,” he says. “You’re ‘that guy’ and then you’re some other guy. It goes back and forth. You’re hot, you’re not, you’re cold, you’re lukewarm. I’m having a nice moment right now and we’ll see what happens. We’ll see how long I can ride it out.”

Rockwell admits he’s been fielding better offers since his Oscar win. He wouldn’t mind more headlining parts, though he’s not bent on them. His place in the cultural firmament is a unique one; while many leading men are hired, basically, to play themselves (see: Clooney, George; Rock, The), Rockwell is tapped for his ability to disappear into roles completely. If people have trouble remembering his name, it’s because he’s so convincing as his characters you forget he’s acting. 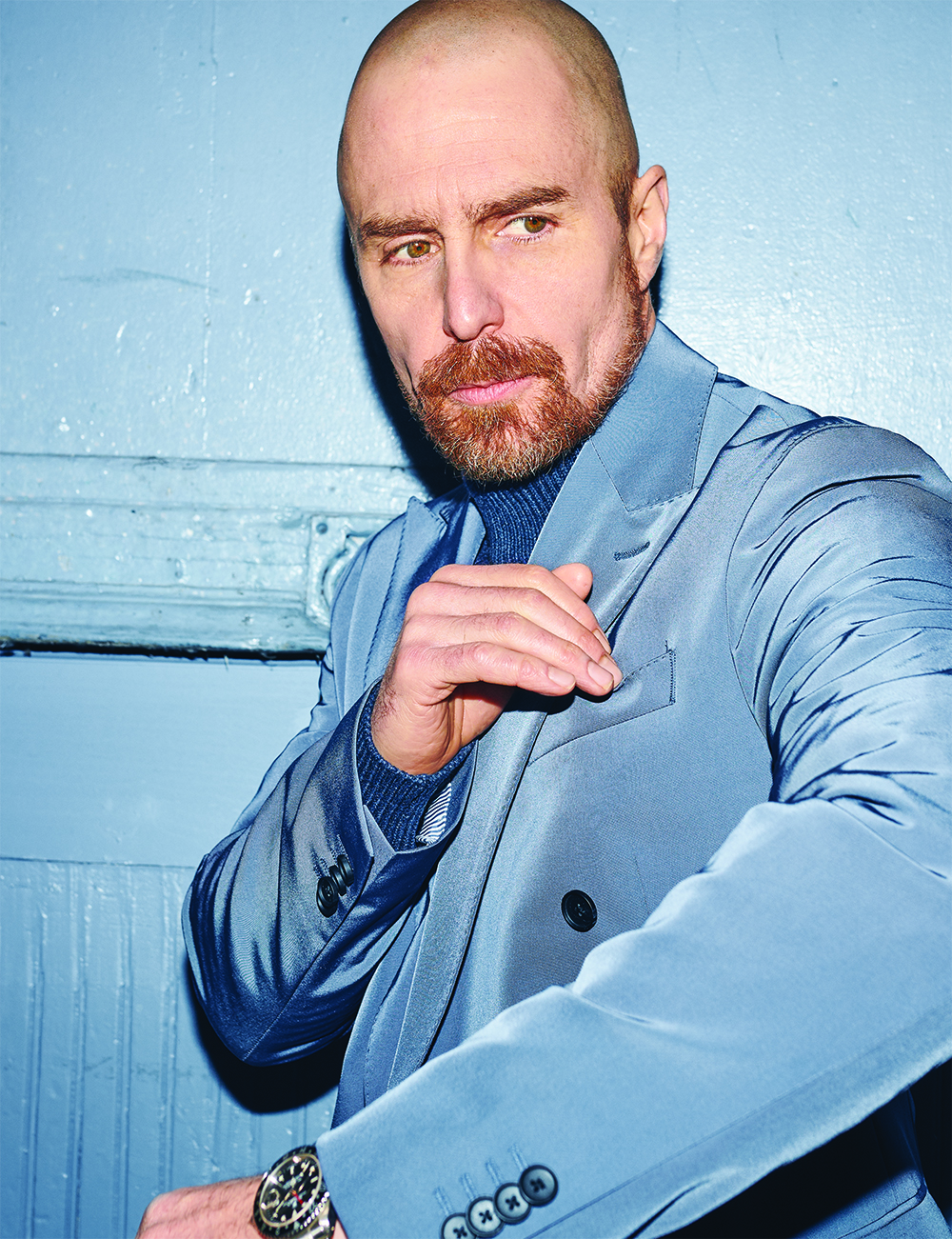 This, by the way, is by design. Though Rockwell seems to pirouette through his performances with a certain organic looseness, there’s a studious, technical approach behind it all — the same way Fosse’s choreography appears minimalist but is deceptively complex. He still uses an acting coach — a specialist in the Meisner technique, aimed at getting performers out of their heads in order to behave instinctively with their surrounding environment. “You’ve got to keep working,” he says. “It’s like a conditioning coach, the same way a boxer has one.” Fact is, he toils inordinately hard at his craft. “I practise a lot to make it look loose and easy, but it’s actually painstaking.”

“I would never play a linear, straight-up superhero. Mine would have to be a little fucked up. I’m not Captain America material.”

Rockwell will go to impossible lengths to prepare for a role. He’ll reread a script until his eyes burn, rehearse scenes incessantly, and make great efforts to like his characters — a requirement for every part, he says, no matter how unlikeable they may be. In Best of Enemies, he plays C.P. Ellis, the KKK president who battled civil rights activist Ann Atwater (Taraji P. Henson) over school integration in early-’70s North Carolina. To empathize with Ellis, he spent hours picking the brain of reformed neo-Nazi Christian Picciolini.

I ask what it takes to get into the head of a bigot, and suddenly, he gets profound. Woke, one might even say. And not just by dumb actor standards. “With a racist, it’s not so much that you hate brown people or this or that — it’s really more that you hate yourself,” he explains. “So, you then take it out on those people. I think when you see things like the Charlottesville riots, there’s an innate self-loathing that motivates that. And that’s certainly true for Ellis; he needed somebody to point the finger at and say, This is the reason I’m not doing better. That’s something I feel we can all relate to: putting the blame on somebody else and not taking responsibility.”

He lets out a sigh. Who can blame him? It’s a punishing routine.

Seconds after arriving home, Rockwell’s having a laundry-related emergency. “Jesus! That’s a lot of dry cleaning. Fuck me! Oh my God. Hold on, I’ve got to carry this stuff up the stairs.”The gruelling climb never ends. It’s straight to bed, up in the morning for more rehearsals, then filming, promo, meetings, repeat. This break can’t come soon enough. Rockwell figures he’ll take a good year off, once he’s finished doing press for the movies and series. After some more thinking aloud, though, he talks himself down to six months. Or maybe just a couple. This time, he says, he wants to wait for the right role. He starts spitballing ideas, like I’m his agent. There’s a potential film remake of David Mamet’s American Buffalo he’s currently eyeing. Anything with Paul Thomas Anderson, Steven Spielberg, or the Coen brothers would also be great. Although, what he’d really like to do? A superhero movie. Black hat, white hat, whatever — he wants another go at one. (He played Tony Stark’s rival Justin Hammer in Iron Man 2.)

“I’d rather be the superhero this time,” he says. “But I would never play a linear, straight-up superhero. Mine would have to be a little fucked up. I’m not Captain America material.” He’d indeed be a tough sell as an Avenger. “I’d probably sooner get cast as a supervillain. That’s the way my career’s been going. But I would do either. I’d play the Riddler. That’d be fun.”

And after all that dancing, a little fun is in order.