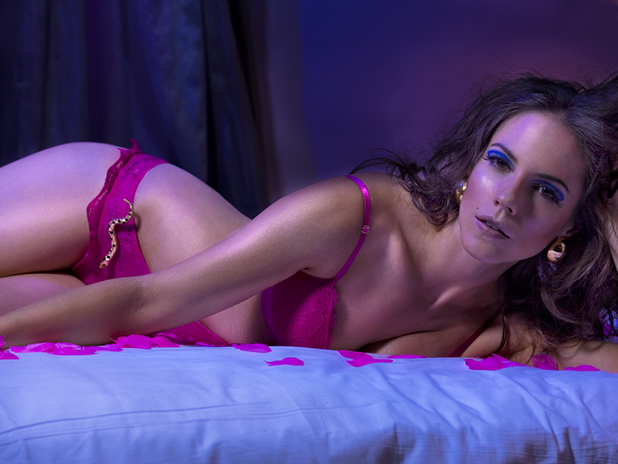 With her popular show Lost Girl entering the second half of its final season later this year, actress Anna Silk had to say goodbye to her beloved ass-kicking character. The sci-fy queen (and New Brunswick native) has spent the last five years as Bo, the bisexual succubus who fights dark forces. That’s right.

She wasn’t quite as intense as her character, but she was willing to open up about the show, Bo and a certain inappropriate Amy Schumer sketch. The final episodes of Lost Girl are airing soon, but you wrapped up shooting last year. What do you miss most about your character Bo?

I don’t know if I’ll ever play another character quite like Bo. I mean, I got to do a bit of everything on that show and there was so much fun and I just love her strength. She’s just so strong, even when she’s afraid or unsure a lot of the time, she just kept moving forward. I love playing that kind of character. She had a this kick-ass core too. She always looked great! She was just ready!

With Mad Men ending this year too, I feel like we’ve been hearing so much about sad casts!

It totally was, ugh, that last day on set… lots of emotion that day, but really lots of happiness too. It’s hard. They become part of your family and it’s an experience that you share with those people that you don’t really share with anyone else. It’s weird to move on, but it’s actually good to move on, as well.

When the show first came out, it was notably one of the first Canadian shows to really embrace the LGBT community. When you were first filming were you a little bit worried about how it was going to be received?

I wasn’t at all. It’s funny, I just didn’t see it quite like that. I knew it was special. I knew that the role was special. I knew it was really unique to have a bi-sexual lead character on TV, but I didn’t think about—I guess I just thought about how to portray her in the most authentic way. What was authentic to her was that she was sexy, she was bi-sexual, she was in love with Dyson, she did fall in love with Lauren and she had relationships with both of them. Once that resonated with audiences we realized, “oh, okay, this is having a big impact”. The majority of my fan-mail and Twitter messages are about relationships. I feel so blessed that I got to play that character and have it be embraced by that community.

Sci-fi shows always seem to have the most loyal fans.

Our fans really took ownership of the show, which was great. People come up to you and they’re crying and they want to tell you something and you can see how hard it is for them. And then they tell you, ‘that person you’re portraying on TV, that’s, that’s me, and I was able to talk to my parents about my sexuality because of that relationship.’ It means so much to them and I just feel really touched that I could be part of something really positive in their life.

What kind of training did you have to go through to get into character?

Bo’s silhouette is tight black leggings, high black heels, tall, tall boots, a slim, slim waist and lots of cleavage. I worked with trainers and I did a lot of Pilates to get my core nice and strong.

Your character is described as a succubus. Did you know what that was going into the show?

The incubus-succubus phenomena is actually something that I was familiar with before the show. It’s because I used to have a recurring nightmare (this is totally true) and in that nightmare I felt paralyzed and terrified. It was full of fear and I felt like there was this presence sort of looming over me and I had it for years.

Then one time, my mom was on an airplane and she was reading a magazine about nightmares that people have and it’s called the incubus-succubus phenomena and the idea is that you’re being sort of drained of your energy and essence in your sleep by this force. So it’s seen as kind of an evil force, but yes, Bo was a succubus (laughs). It was bad news for a lot of people.

Do you hope she’s leaving people with a better perception of it?

I think she probably is.

We’re going to move into some weird waters now because you’re so stunning that I can’t believe you’re 41.

Oh my god, thank you! It’s funny actually, I recently got ID’d at a bar with my husband, which brought me endless amounts of joy. But, you know, I’m totally fine with getting older. It really does change your perspective on things.

I don’t know if you’re a fan of Amy Schumer, but she has a skit called ‘Last Fuckable Day’ and you made me think of it.

I love Amy Schumer, but I haven’t seen it!

It’s about women who are told by Hollywood that they’ve aged out of being deemed ‘fuckable,’ but it’s gorgeous women like Julia Louis-Dryfus.

[Laughs] That’s so funny. Julia looks amazing! Hopefully, I still have a few more fuckable days left in me.

That’s why I wanted to bring it up. I can’t imagine anyone telling you that you’re no longer fuckable.

Thank you! That makes me think of Jennifer Lopez because… what’s her deal? She’s always dressed so sexy and looks amazing. She’ll never have a last fuckable day. She’ll be 80 with one wrinkle. Thank you for your compliments. I will check out that video because I think Amy Schumer is hilarious.