A version of this story appears in Sharp: The Book For Men Fall/Winter 2018, on stands now.

While the rest of Hollywood got gussied up for this year’s Oscars, Michael Shannon threw on a puffy jacket and watched Guillermo del Toro’s The Shape of Water — a film he starred in — win Best Picture on mute at a Chicago watering hole. A photo of said bar hang immediately went viral, and for obvious reasons: it was peak Michael Shannon. The man looked unimpressed, untouched by wealth or fame, his face nearly twisted in the same pained grimace we’ve seen him make in countless powder-keg performances, from Boardwalk Empire to Nocturnal Animals. He may as well have been watching a PowerPoint presentation.

Though he’s dabbled in major-studio fare before — most notably as General Zod in 2013’s Man of Steel — it seems Shannon couldn’t be less enthused about movie stardom nowadays. Celebrity mixers aren’t his bag. When he’s not on stage at A Red Orchid Theatre, the Chicago-based group he helped found (and, it turns out, the actual reason he skipped Oscars night), he’s selectively pursuing creatively fulfilling work about real-world problems. This fall, he’ll appear in What They Had, an indie drama about an Alzheimer’s-stricken family, and The Little Drummer Girl, a TV adaptation of John le Carré’s classic Israel-Palestine thriller. Not quite the sorts of projects that’ll garner him household name status, but lately, the two-time Academy Award nominee has been refocusing his concerns — away from Tinseltown, and more toward the wildfires raging on its periphery. At 44, he feels a pressing need to tell stories that might rattle viewers from their escapist slumber, and awaken them to the many hellish perils — global warming, social media filter bubbles, the guy in the White House — in their midst. In other words, you probably won’t be seeing him in any more superhero movies.

Talk to Michael Shannon and he’ll cut right to the chase: the world is falling apart too damn fast to waste time preening for the red carpet. I’ve enjoyed today so far. My sister’s visiting, so my kids and I have been hanging out with her and my nephew, who’s really cute. We went to the zoo. Oh, and I just made a little Internet spot about voting in the midterms.

Nice! Being in the public eye, do you feel a responsibility to be politically vocal?

I don’t know why anybody would do what I say. But to the extent that I might encourage people to vote, I think it’s worthwhile. I mean, people need to vote. Whether I am a celebrity or a mushroom, it doesn’t make much of a difference. Though I don’t know how people’s minds work these days. I find the world to be a very terrifying, frightening, hellish place. It’s like a Jackson Pollock nightmare.

And does that have something to do with, say, Donald Trump or the environment or…

It always bewilders me how small an issue the environment is for so many people. It doesn’t take a substantial amount of intellect to realize we’re dependent on the earth in order to survive. And environmentalism is always made fun of, like, “Oh, who cares if the one-eyed cuckoo bird goes extinct?” But if we don’t watch out, we’re going to be an endangered species. It’s amazing how people don’t process that. Maybe it’s just too overwhelming to digest. It’s too scary to fathom. I guess people just have lots of distractions these days.

Yeah, man. It’s all this crap technology — it’s lobotomizing people. I’m always asked why I’m not on social media. It’s because I want to keep awake. I don’t want to fall down a rabbit hole of non-reality. I mean, people shouldn’t be able to influence an election on Facebook. Why does anybody even take anything they see on a computer seriously? It’s not real! People should be embarrassed.

I don’t know how this happened, but suddenly, I’m considered a celebrity, which couldn’t be further from the truth. I mean, I know I’m on the cover of this magazine, but it’s not really my M.O. I’m an actor — it’s just my job. I don’t drive around in a big black limousine everywhere; I just take the subway. But if I express an opinion, people go, “Oh, well, he’s just a pampered celebrity who doesn’t know anything about the real world.” Which is ironic because I honestly feel like I know a lot more about the world because I am an actor. I’ve thought about a lot of different people’s points of view, I’ve travelled, I’ve learned things I wouldn’t have otherwise.

“In the grand scheme of things, a hundred years from now when we’re all fighting each other for water, nobody’s going to give two rats’ asses about how people look at my body of work.”

What’s your relationship with fame like? It seems you’re not interested in being a traditional Hollywood leading man or curating a personal brand.

Honestly, someone sits you down at one point and says, “You need people to recognize you because it helps you get better jobs. You don’t do publicity, then people are less likely to give you a nice paycheque.” So, I guess I’ve got to get my face out there. And I don’t mind it. Most the time I don’t really have much to say, but I do it. Still, I don’t really care. A lot of people assume I live in L.A. and I hardly ever go there.

All I know is, I’ve been acting since I was 16. It’s what I do. I can do it like Sam-I-am: I can do it here, I can do it there, I can do it up in the air. But some people are like, “Oh, you’re so good at this one particular character.” And I’m like, “Wow, what an overwhelmingly reductive and oblivious point of view on what I do.” You mean when people say you’re good at playing the scary bad guy?

I can’t even say it aloud because I find it so incredibly irritating. But whatever. It doesn’t matter. The only thing that matters to me is that my phone keeps ringing and people keep giving me money to act because I have a family to feed. Other than that, I don’t give a shit. In the grand scheme of things, a hundred years from now when we’re all fighting each other for water, nobody’s going to give two rats’ asses about how people look at my body of work.

Oh, you betcha it’s true! Look at this summer, man! Look at what’s going on: the fires in California, flooding in Pennsylvania, Miami’s going to be underwater soon. It’s all ridiculous. And people are just asking for it. I’ve never seen anything like it!

When you think of it in the context of the world being on fire, does your job feel a little trivial?

Yeah, it does! Honestly, it does! And I could just stop and resign tomorrow. But if I did that, then my own quality of life would go downhill and my family would suffer. I don’t have any other way of generating an income. I can’t go strap myself to the side of a tanker or tree somewhere. I’ve got a lot of people counting on me to keep them happy and healthy. So why not just make more big-budget blockbusters and cash in?

I can’t do those! I won’t do them. I do fine. I make money from what I do — we have a very decent way of life. I’m not trying to make $500 million. I would not want to play Shazam for the next 20 years of my life. I’d have a nervous breakdown.

Honestly, I’ve been working too much lately. I feel a little overexposed. I’d like to make less stuff, like Daniel Day-Lewis. He had it figured out — he turned down hundreds of scripts, and every once in a while, he was like, “Ah, this one,” and he’d knock it out of the park. I don’t think I’d be that selective, but something like What They Had, I just thought was such a beautiful, touching trip, and was based on this director’s experiences with her family. It felt very true and necessary. Authenticity is hard to come by these days.

People say they voted for Trump because he seemed like the most “authentic” candidate.

Yeah, all the while they were voting for a privileged white kid who’s never worked a day in his fucking life. Like, how stupid can you fucking be? Oh man, don’t get me started.

You just finished a run in the absurdist play Victims of Duty by Eugène Ionesco. Does embracing the absurd help you cope with the insanity of everything?

To me, the Theatre of the Absurd isn’t absurd. What’s absurd to me is a movie about Iron Man. But the Theatre of the Absurd is my experience of life. It’s not a traditional story form — all the moments aren’t linear. Life isn’t orderly; it’s chaotic. Besides, it’s much more fun than trying to pretend you’re somebody who you’re actually not. Sometimes that’s a drag. Like, really? I don’t want to act like I’m Bobby today. I just want to be myself. And in theatre you can do that. Can we talk about your socks? You always wear such wacky ones for your talk show appearances. Is the entertainment industry too rigid with its rules of fashion?

I think people get pretty high-strung about it unnecessarily. Like, it’s just clothes! We’re all naked underneath. I like to have fun with it. But I like wearing different designer clothes for these shoots. It’s nice to know what that’s like, though I couldn’t say I would ever go out and drop $5,000 on a suit. I’m more of a T-shirt and jeans kind of guy. And I do like to wear funny socks. I guess it’s a dad thing. People like to gift me socks because I don’t wear ties.

You’re not that kind of celebrity.

Holy shit, man! I’m as far away as I can be without being out of it. 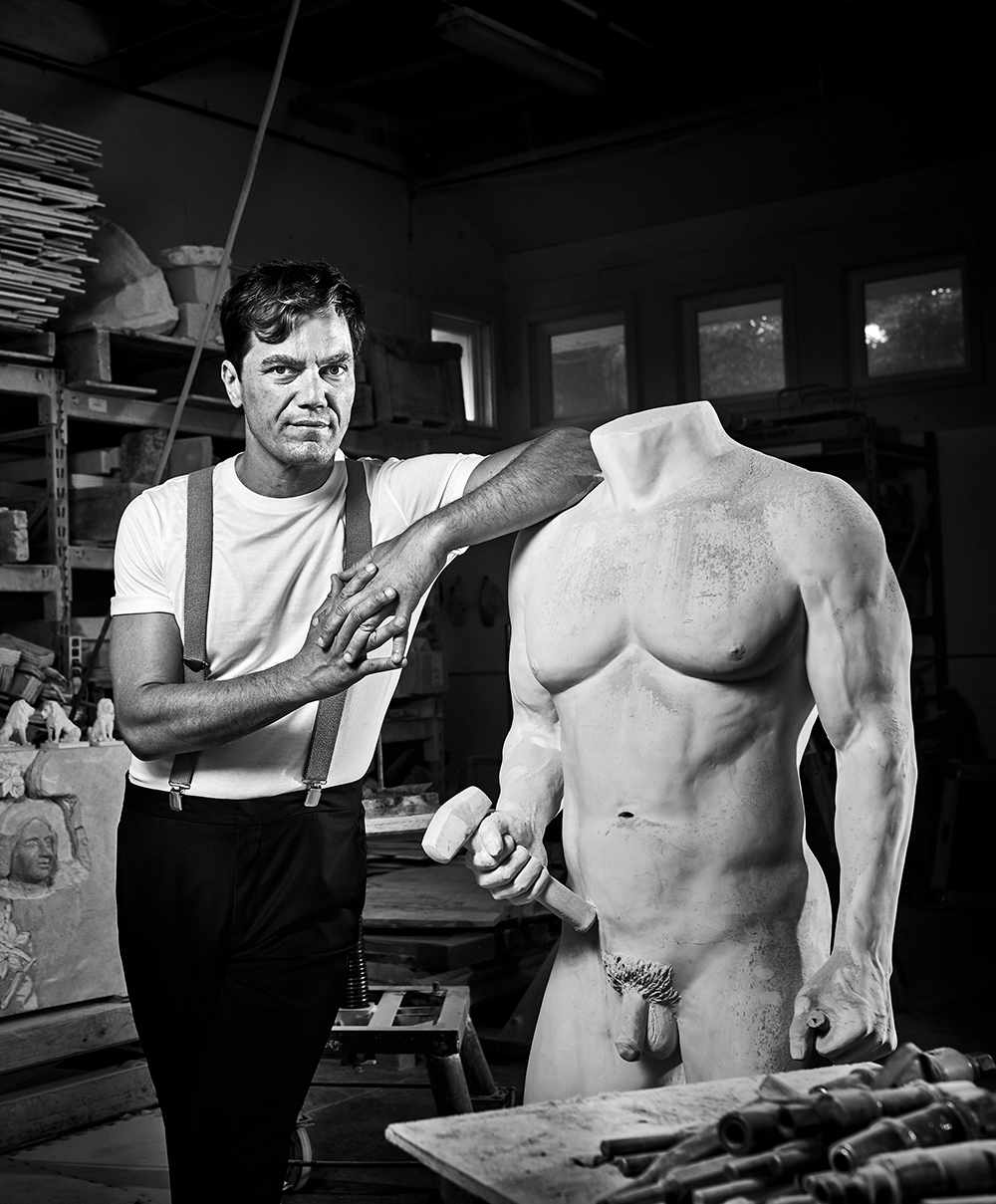