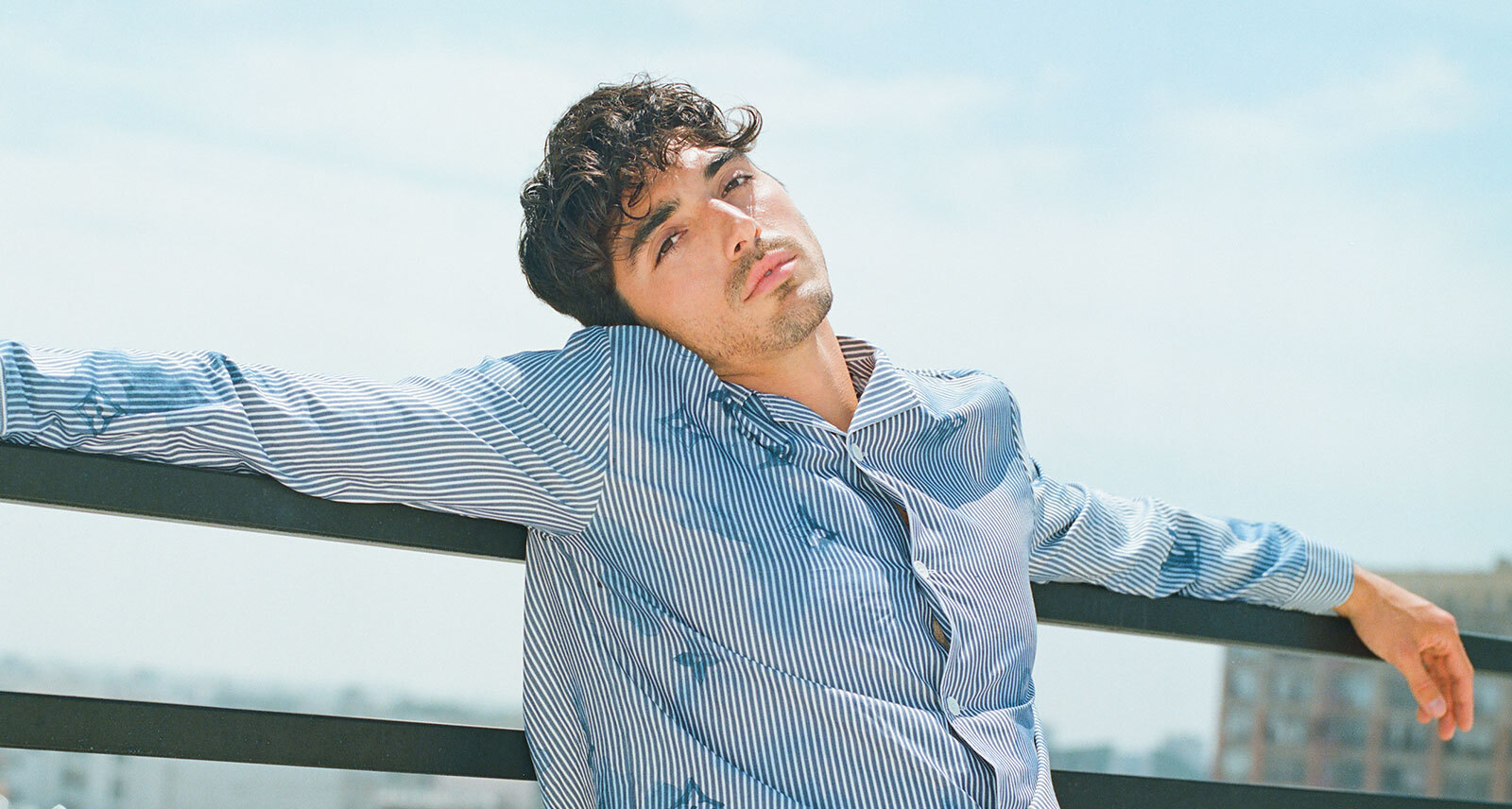 When The Kissing Booth 2 was released on Netflix in July of 2020, Taylor Zakhar Perez had roughly 70,000 followers on Instagram. A couple of weeks later, he had more than four million. But unlike a lot of other actors who have dominated the young adult genre in recent years, Perez, 29, did not experience his dramatic rise in popularity all at once. “I feel like the release during a pandemic saved me a bit from ego or getting show-ponied around town like Prince Ali [in Aladdin]. It definitely humbled me to be like, ‘I’m having such a moment right now; the world is having such a moment right now. I’m just grateful for the support, so there’s really nothing for me to complain about,’” he says over Zoom.

Directed, co-written, and produced by Vince Marcello, the second installment of the Kissing Booth trilogy stars Perez as Marco Valentin Peña, a charismatic and multi-talented new student who finds himself caught in a love triangle with Elle (Joey King) and her Harvard-bound beau, Noah (Jacob Elordi). After undergoing an intensive four-month audition process — which included acting, singing, and dancing — in early 2019, Perez credits King and Marcello for setting a collaborative on-set tone that he hopes to emulate in all his future projects.

“Vince was just such a champion [of mine] from the beginning. We had a chat a bit ago and he was like, ‘Taylor, when I saw you acting, you were Marco.’ He’s just a special and spec­tacular human that knew all the levels of the things that we needed to do,” says Perez, whose other acting credits include iCarly, Code Black, and Scandal. “Joey is just the coolest and the most giving acting partner. When you’re shooting, some actors won’t give you a full performance when you’re getting your [camera] coverage, but Joey is never not giving 110 per cent. I love having mentors and people to look up to, and Joey was that for me on set every day.”

The third-youngest in a family of eight children in Northwest Indiana, Perez jokes that he was the “real-life Troy Bolton from High School Musical,” as he grew up immersing himself in the wonderful world of musical theatre while maintaining a strenuous swimming schedule. It wasn’t until his senior year that he decided to turn down a swimming scholarship to Fordham University in favour of attending UCLA, where he majored in Spanish and Community and Culture and worked mul­tiple jobs to support his dream of becoming an actor.

While he agrees that the industry has seen an increase in Latin representation in the past decade (“I haven’t had this many auditions for Latinx roles ever in my life”), Perez, who is of Mexican, Middle Eastern, and Mediterranean descent, says that he has noticed a “troubling” trend among casting directors in Hollywood.

“They want someone who’s Cuban-specific or Mexican-specific, and you’re like, ‘Okay, great.’ But when you get into the minutia of their skin colour, they’ll say, ‘We need someone darker. This Latin actor is not brown enough.’ It’s very unsettling, because I would hate the industry to start saying Latin is [only] dark-brown skin and black hair,” he explains. “I feel like, once they start understanding that we are so diverse, we just need more BIPOC folks in positions of power to make these decisions and let fewer non-BIPOC people speak for them.”

With his newfound platform, Perez, who acknowledges that his mixed heritage has allowed him to “pass” as other races in the past, recognizes the unspoken responsibility that he has to speak out about issues that directly affect his own loved ones. “Going from trans rights to gay rights to people of colour’s rights to all of it, I’m here for all of it, however they need it. As I’m meeting more and more people, my only intention is to bring love, kindness, and support after this frickin’ year that we just went through,” he says with a natural fervour.

Perez is wary of both fake news and cancel culture, so he tends to do his own research before speaking on social and political issues. “You think of the immigration camps where children are held in the Trump-era and then you still have them being held in the Biden era. You’re like, ‘Okay, well, this wasn’t okay during that time period, but this is okay now? At the core, what is the truth?’ I find that really difficult, because people are so quick to share and post when you could be ruining someone’s business or community,” he says, later adding that he has no plans to join Twitter anytime soon. (“I feel like it’s a dark place. People are just mean! I don’t want that bad juju in my life.”)

Buoyed by a strong support system (away from Twitter), Perez has every reason to be optimistic about his future. He’s waiting with bated breath for the final Kissing Booth movie, which is slated for an August 11 release. He’s now — for better or for worse — a fashion influencer, describing his personal style as “Issey Miyake beach vibes on my good days and Steve McQueen, jeans, flannel, mountain vibes on my roll-out-of-bed days.” But at the heart of his onscreen work is a renewed commitment to telling new stories that challenge the status quo.

“I love putting women in power, and I hate to play second fiddle to another actor, but I love that more projects are showing women as these strong, intelligent, superhuman beings. It’s exciting, and I love the kind of stuff that I’ve been getting,” he says. “I also love superhero stuff — X-Men was my child­hood — and I want to be a superhero one day. If Wolverine comes back, I want to be Wolverine. That’s the goal.”