Of the many objectively large motorcycles in the present market, BMW’s new R 18 B just hits different. The big bad Berlin-built cruiser is a few steps outside of what we’ve come to expect from BMW Motorrad, especially when much of the brand’s offering lives at the forefront design and engineering innovation. Its monstrous horizontally opposed twin cylinder engine packs 1,802cc of displacement — 1.8 litres, in autos speak — moving more volume per cylinder than countless other motorcycles on the road.

The first of the R 18 models launched in 2020, and for 2022 the brand unveiled its big sister — the R 18 B, and R 18 Transcontinental — both fitted with a full fairing and a host of other upgrades. Clearly setting their sights on a different corner of the moto market, the R 18 family is out to do battle with the Harley-Davidson crowd, while also tapping into the smaller segment of riders who would otherwise consider smaller European makers like Triumph or Moto Guzzi. 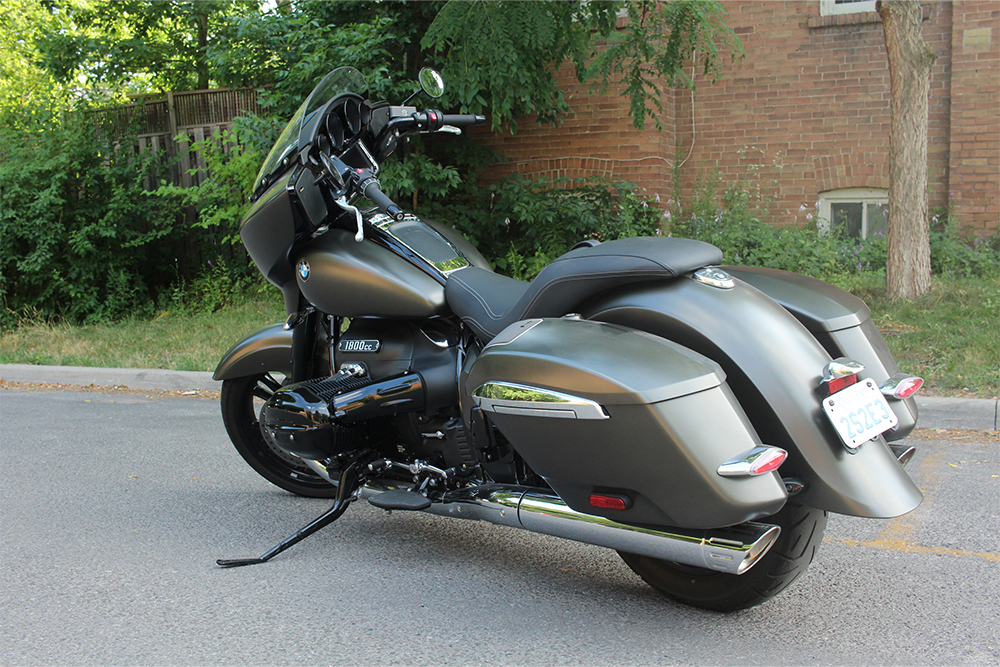 Transparency and honesty being paramount; I am not, nor have I ever been a “cruiser guy”. After years on dirt bikes followed by many years on pavement riding various forms of adventure, café, and naked bikes, the idea of having my back anything less than upright and my feet vertically aligned with anything other than my posterior puts me in foreign territory. That said, riding preferences do change over time, and countless riders migrate towards a comfy cruiser as the years pass by. Am I approaching that stage of my riding career? There was only one way to find out.

There’s no escaping the fact that many Europeans have a strangely strong bond with American nostalgia — Route 66, Elvis, Marlon Brando, et al. This connection carries forward into the cruiser scene, and while its boxer engine is proudly and primarily a BMW Motorrad hallmark, the design of the R 18 B is otherwise very American in spirit. That said, the lens shifts as you get near the bike and throw a leg over it for the first. time. On approach you’ll spot the Marshall Audio speakers affixed to its fairing and saddlebags, but you’ll also notice that its rear wheel is driven by a shaft rather than a belt or chain. You’ll also see a rather high-tech 10.2-inch TFT screen — one that runs the Motorrad-equivalent of BMW’s iDrive to display auxiliary functions, including navigation, audio, and other information separately from its analog gauges.

Priced from $26,995 before options, BMW ensured to load this cross-country cruiser with all of its latest tech. Aside from audio and navigation, the R 18 B offers keyless starting, a waterproof wireless smartphone charging compartment on the tank, a reverse gear (justified, given its 398 kilogram curb weight), and can even be fitted with active cruise control. Our tester was not fitted with the latter, and frankly I was not left wanting.

To be fair to BMW, the roots of the R 18 and its massive powerplant are entirely authentic. That whopping engine — an old-school pushrod unit with overhead valves — is an effective nod to the BMW’s R 51/2 motorcycle. The R 51/2 was the brand’s first post-war twin cylinder motorcycle, and one that used chain-driven camshafts in order to shorten the length of the pushrods that open its intake and exhaust valves. This same setup is used in the R 18, albeit with modern materials, electronic fuel injection, throttle-by-wire, and so on.

A Different Kind of Rolling Thunder

Getting the R 18 B out on the road, you’re consistently reminded of the fact that an oversized boxer engine rests between your legs. If you’ve ridden a boxer before, you’re likely familiar with one of their more interesting quirks. On their more “standard” engine sizes, if you blip the throttle while sitting at a standstill, you’ll feel a light tug or tilt to the right — an effect of the rotational mass of its powertrain. When you move up to this behemoth of an engine, that feeling is amplified to a startling level. Not a concern or danger, but more a reminder of the monster mill that you’re about to launch out on.

Once you’re moving, the R 18 B’s engine immediately proves its worth. Delivering 91 horsepower and 116 pound-feet of torque, the R 18 will blast off from a standstill at a pace that belies its comfortable and casual silhouette. In the city you can effectively live in second gear — while the box has six speeds to choose from, the abundance of low range torque makes first and third somewhat obsolete. That said, this isn’t motorcycle built for stop-and-go in the first place, between its significant stature and distance-based creature comforts. Being air cooled, getting snarled up in traffic can yield its own share of problems.

Even though its posture was foreign and its mass nearly doubled that of my daily ride, the R 18 B still managed to win me over in many respects. The comfort and convenience factor of a larger ride, replete with the kinds of niceties I’d never desired previously, made the R 18 B a joy to just keep riding day after day. In turn, it wasn’t without its shortcomings. First and foremost, it’s the kind of bike best kept as a weekender or long-hauler rather than any kind of commuter. Maneuvering its hulking steel carcass through city traffic of any kind is cumbersome at best, and something made substantially worse by construction zones, streetcar tracks, and other obstacles that remain ever-present in the Greater Toronto Area.

Simply put, this is a veteran level motorcycle, with a personality and sticker price to match. Those eyeing it up as they edge their way into midlife crisis mode, please avert your gaze. While it may look calm and composed, the BMW R 18 B is the last thing any rookie rider should entertain. Full stop. That said, it’s absolutely something worth aspiring to once you have some years of safe riding under your belt, and the free time in the calendar to rocket across the continent.

Learn more about the BMW R 18 B here.