On CW’s hit post-apocalyptic drama The 100, Lindsey Morgan plays Raven Reyes, a badass mechanic. Which, really, doesn’t seem too much of a stretch for her. For one, the Houston native exudes bona fide badass energy when we speak, saying whatever she damn well pleases without thinking twice about it. (She also boxes and does Muay Thai and can probably lift more than you.) For another, she’s keen on fixing things in real life: she’s an ambassador for Active Minds, a nonprofit organization supporting mental health awareness and suicide prevention for young adults. While other celebs are intent on refining their Facetune chops on their Insta feeds, Morgan uses hers to spread messages about finding cracks of light in a bleak world.

We sat down with Lindsey to chat about her come up, depression and anxiety, and the importance of getting real in an innately phony social media landscape.

So, let’s start off by talking about The 100. Those who’ve seen it know it’s an amazing show, from the story to even the costumes. What’s it been like working with that crew?

I don’t know why, but something in me wanted to make a joke and be like, “Oh that shithole? It’s terrible.” But yeah, it’s been really rewarding to be able to work on something for now going into six years and growing with a group of people, where we have become a family. But it’s always like, we don’t know how long it’s going to go. We don’t know how long we’ll get the opportunity to do this. So, every year that passes is becoming more and more of a special world for us. And I know we are all very grateful for it. So yeah, it’s been the best job of my life. I’ve learned so much, I’ve grown so much as a person, as an actor, as a professional. I don’t know who I’d be without it. Was acting something you always wanted to do? Or was it something that just spontaneously came up?

It definitely wasn’t something I always wanted to do. I wasn’t the kid who wanted all the attention, that was cracking people up, or anything like that. Actually, I was very shy as a child and I really liked painting and drawing — just really quiet all the time, in the corner painting by myself. [Laughs.] So, I’d say I’m 50 per cent introvert and 50 per cent extrovert. The idea of all the attention on me, and all eyes on me, kind of terrified me. It still does, in a sense. But there was something about acting, something about the idea of transforming and  being exposed and being vulnerable. I remember I went to go see a musical — I think I was seven — with my mom and I saw the actors come out on stage and they were performing, and they were just so great. I was like, Wow, if I could be brave like them, then I would be great. From there, I just had this secret desire to do that. But I turned 18 and took a different path; I was really interested in politics and journalism and very good, very serious things. But I knew they never stimulated the creative side of me. So, I had this small part in a play in high school and I was putting on my makeup and I had this kind of epiphany, where I was like, If I could do this every day, I’d be happy.

Yeah, but you know, it was just as simple and pure as the one I had when I was seven, when I was just like, Wow, those people who do that are brave. I want to do that. I just listened to that voice, whatever that voice was, and my heart, and then my dad. And I’ve never felt any doubt about it.

Yeah, I know! I have doubts about what I’m going to have for breakfast! And for this it’s like, nope, I’m doing this for the rest of my life. Ok. Done. Bye. [Laughs.]

Jumping back to The 100, your character Raven Reyes — do you personally identify with Raven in some of the ways she does things or thinks?

Yeah. I mean, I always say every character I play has aspects of myself in them that I just turn up or turn down. I think we all can, universally, find a connection with each other; some understanding within each other. And so, for Raven, she had a lot of my nerdy side; I love to learn, I really like science, I love knowing things, interesting facts, watching TED talks, and documentaries. She has my intellectual side. But also, I love being active — I box and do Muay Thai and I lift heavy weights. And I love hiking and being outdoors and being adventurous. And so, Raven has that strength and the fierceness in her body. She’s not afraid of getting hurt. That fearlessness, that fire, when I’m working out or when I’m competing, I feel like that is a big aspect of her. But she also has this side where she is very noble, she always wants to do the right thing. She always want to help, and save her family and friends. I aspire to be just as good a person as she is. 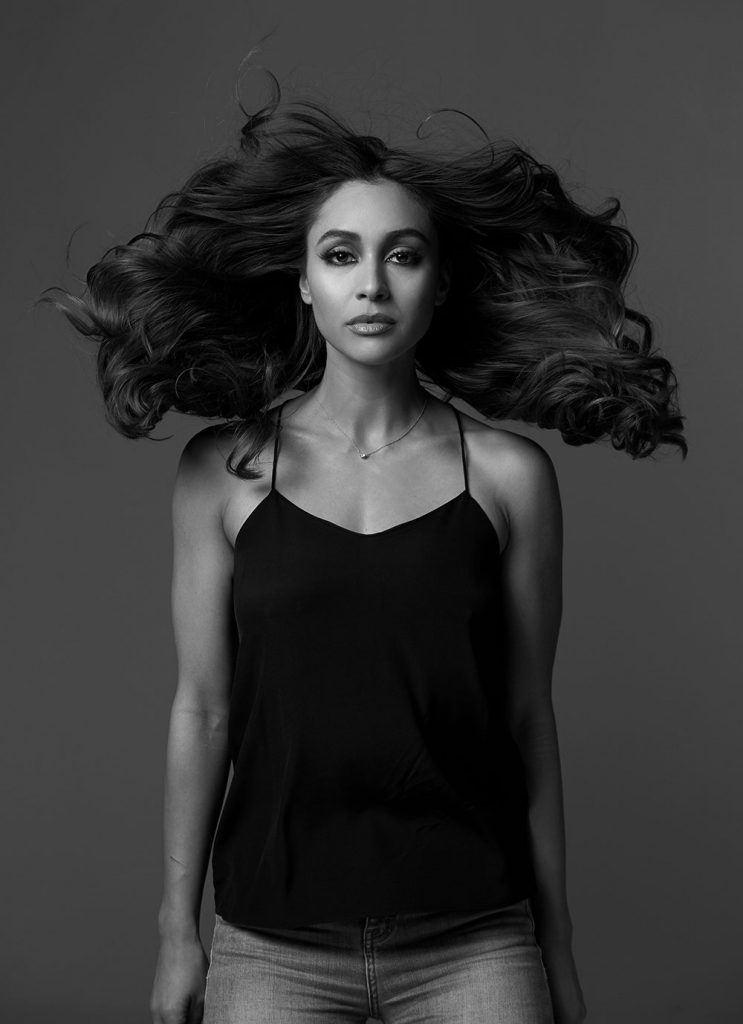 Aside from the acting, you’re a new Active Minds ambassador. I want to talk a little bit about that. In the world we live in now, it’s so important for role models to be out there, especially role models with an influence that people see.

I think it’s very important for people who have a platform to really use it for good in the world. We’re in this weird place where people have more platforms than ever and we can reach people around the world at a rate that’s insane! I think, and not to quote Spiderman, but with great power comes great responsibility. And sometimes I get frustrated with other celebrities; there are people who have a giant reach and influence, and are doing nothing of value with it. So that’s why, to me, it’s something I want to delve into more. I want to use my platform to better the world and to help others.

So, I needed to really focus on something close to my heart and mental health is a huge thing. I have mental health issues that run in my family and I had my own mental health problems in the past; depression and anxiety. So if we had more people willing to talk about it and express themselves and be brave and say, “Hey, I’m not feeling well and I need help,” I know other people will answer that call. But when you’re in the whole of depression or anxiety or anything, you think you’re all alone, and you think it’s shameful to ask for help. You don’t want to be a burden, and you don’t want people to think you’re weak or bad or damaged. That’s such a ridiculous expectation we put upon ourselves – to have a perfect mentality. We’re human! It goes against being human. I feel that the more honest and open we are about this issue in our society, the stronger we’ll all be to overcome it and understand it.

I feel like we’re in a really difficult time right now but in a really progressive time as well. You know what I mean?

I completely know. We’re in this progressive time – you know, we’re woke and we’re talking about things and we’re aware of things. We want to have the dialogue, we want to create those spaces, and we want to have inclusion for all, which is very important. But we’re also in this other period where there is more suicide and depression than ever. People are sad and they’re suffering and it’s still such a taboo issue that people are very afraid to touch. And I have had people tell me – other times when I wanted to champion mental health and be a part of that foundation – I’ve literally had people I work with, tell me, “Don’t do that. Productions will think you’re an insurance risk. They won’t hire you.” And yeah, I listened to that in the beginning but it always kept poking at me and I just felt like if my story could help one person feel better about themself and not feel so alone, then that’s worth it.

That’s an amazing way to look at it.

Believe me, I can tell you my stories. It’s absolutely a mess. [Laughs.] But it will make you feel better about you! I don’t know. We’ve just got to be real and I think we’re in a funny world where we share so much but we’re still not sharing what’s real exactly. But that’s not me. I’m too real. [Laughs.] The hashtag #selfiesforlindsay, is that something you came up with for your fans?

No, no, they just did that! Full disclosure: I got dumped and I came home after this photoshoot, feeling so sorry for myself, and like, “Ughhh heartbroken once again.” And when I go online, I see this and I’m just so touched, and just so proud. Proud of them. Because a lot of the fans are people I’ve met at conventions and who I know and consider friends now. So I’ve seen them grow. I’ve seen them not be confident at first – to not be able to take a picture of themselves and post it online – and then now for them to be like, “You inspired me to do that and to love myself and to be confident”? I mean Jesus Christ, nothing compares to that. I still get goosebumps thinking about it.

I’ve been seeing the hashtag on Instagram and Twitter. I can’t imagine how that must feel, just pulling out your phone and seeing that.

Yeah! [Laughs.] I’ve been just bawling on my couch by myself!